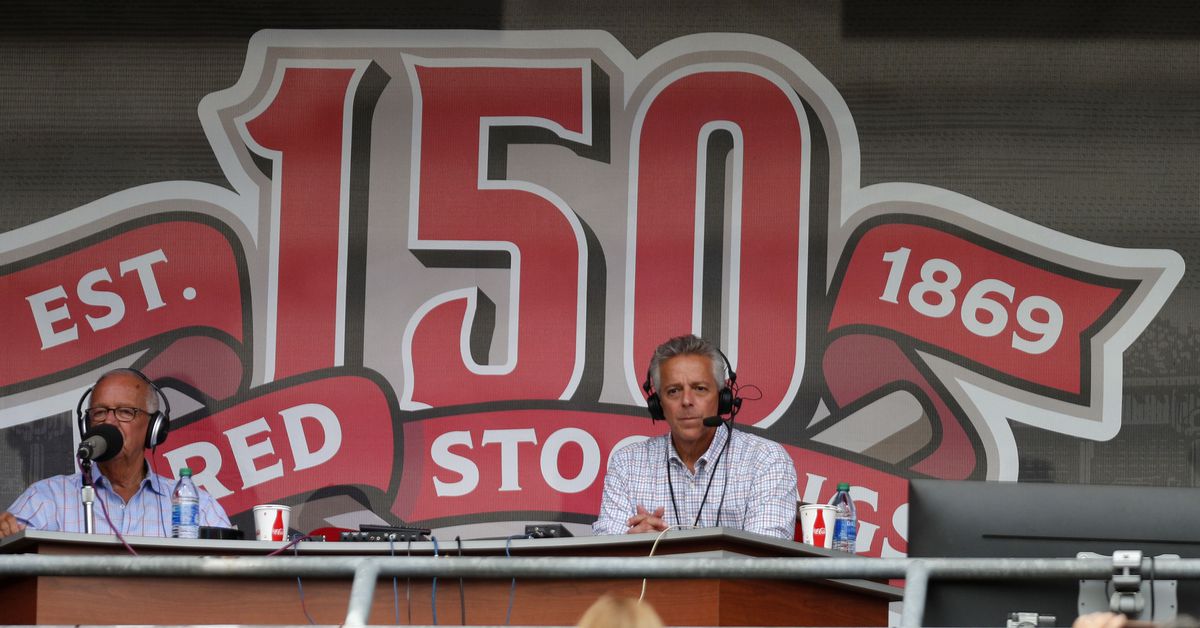 Some baseball broadcasters become indelibly associated with a legendary quote. An “It might be, it could be, it is” here, a “The impossible has happened” there…

Cincinnati Reds play-by-play man Thom Brennaman, however, will be known for a much more disgraceful catchphrase.

Out of nowhere during tonight’s Reds-Royals doubleheader as the Fox Sports Ohio broadcast was returning from commercial, Brennaman suddenly spat out “One of the fag capitals of the world…” over a hot mic.

Longtime Cincinnati Reds announcer Thom Brennaman was caught on a hot mic saying “one of the fag capitals of the world.” He is currently announcing the second game of the Reds’ doubleheader against Kansas City. pic.twitter.com/Uwz07eRIKv

And this one belongs in the trash.

The mind boggles as to what could have inspired such an utterance. Perhaps the Reds’ producer director prompted, “Hey Thom, what would it sound like if Daniel Murphy wrote a Jeopardy category?”

Around baseball, Brennaman and his Hall of Fame father Marty are known as crotchety old schoolers who never hesitate to complain about modern players or statistics. So while we always knew Thom’s baseball philosophy hasn’t left the 1970s, we just found out his social views are stuck in 1952.

The broadcast continued for a little while like nothing had happened. But once the clip got posted to Twitter, it quickly went viral and #FireThom began trending almost immediately. Then — and I can’t believe this is the point of the story where I’m about to write this phrase — things got weird.

In the top of the fifth, word reached Brennaman that the world got to hear him throw out a slur as casually as a ball-strike count. Understandably, he realized that he said something truly heinous:

Thom Brennaman on FSO right now: “I made a comment tonight that I am deeply ashamed of. I am so very, very sorry. I pride myself as a man of faith. I don’t know if I’ll be putting on this headset again.” #Reds @fox19

Except in the middle of his apology, this happened:

Yes, that’s a home run call in the middle of an apology for dropping a slur on live TV. That ball left the park faster than Brennaman’s career.

Shortly afterward, Brennaman handed over the broadcast to Reds field reporter Jim Day and vacated the booth. As the clip makes clear, he was understandably unsure if he would be doing so for the last time.

During his mea culpa, Brennaman solemnly intoned that “I pride myself as a man of faith.” We’ve all heard this “I can’t be a bad guy” sympathy-begging cop-out before. So has MLB Network host Stephen Nelson, who was having none of it:

RE Brennaman’s apology: I loathe the “man of faith” line
-it’s a weak/canned bit for every mea culpa
-it’s an undeniable/ironic fact that supposed people of faith have persecuted the LGBTQIA community for much of history, with religious ‘interpretations’ at the tip of their sword

Outsports also asked its Reds fan readership for their responses on Twitter. We heard back from several who were understandably aghast…

I heard it right after it happened. I was watching the convention news when it popped up on my twitter feed. Sad to say this guy graduated from my high school. Cincinnati has come a long way but it was disappointing to hear. Thanks for tweeting about it. I love your work.

We also received a response from hockey broadcaster Jonathan Kliment who told his coming out story this past July:

This is why I told my story here. When you look for that role model and you dont see them and you see this……in years past it would have been swept under the rug. I hope not this time.

The Reds suspended Brennaman and released a statement, saying that the “organization is devastated by the horrific, homophobic remark.”

“I would like to sincerely apologize for the inappropriate comments I made during last night’s telecast. I made a terrible mistake. To the LGBTQ community, and all people I have hurt or offended, from the bottom of my heart, I am truly sorry. I respectfully ask for your grace and forgiveness,” the statement said.

So now what? While he’s off the air, he has an opportunity. Back in 2007, NBA All Star Tim Hardaway infamously declared “I hate gay people” and proclaimed “I am homophobic” on a radio interview. Those words followed him around for years after he retired and he became as famous for his bigotry as for his on-court accomplishments.

Following public backlash, Hardaway retreated from the spotlight and took time to learn. He quietly got to know the LGBTQ community in his hometown of El Paso and worked with advocacy groups like The Trevor Project in Florida. Gradually, things changed. Hardaway began speaking out on behalf of the community he once vilified and owned up to the hurt he’d caused.

Six years later, Hardaway was the first person to sign a Florida petition to legalize same sex marriage. He didn’t do it for publicity. He recognized it was the right thing to do.

Now Thom Brennaman is going to have a lot of time on his hands that he won’t be using to describe baseball games and he has a choice.

He can retreat into bitterness because one comment potentially cost him his high prestige job.

Or he can be like Hardaway and use that time to genuinely learn why what he said was so hurtful and get to know some of the LGBTQ people his words attacked. He can also use this moment to put his faith into action and do his own work to become a better person.

If he wants another example to follow, he’d be wise to look to his own team’s bullpen, search within himself, and learn how to emulate the words of Reds pitcher Amir Garrett:

To the LGBTQ community just know I am with you, and whoever is against you, is against me. I’m sorry for what was said today.