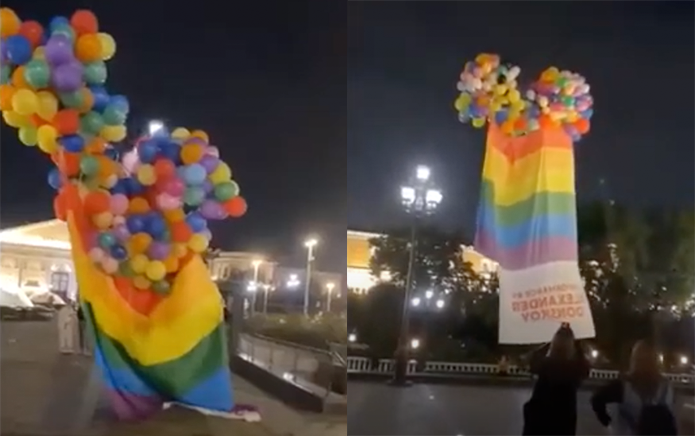 A gay performance artist flew a giant rainbow flag toward the Kremlin in Moscow earlier this week as an act of protest.

Alexander Donskoy, the former mayor of Arkhangelsk, made headlines when he lifted dozens of rainbow-coloured balloons in Manezhnaya Square.

It was a direct response to President Vladimir Putin, who recently criticised foreign embassies for hanging rainbow flags outside their buildings for Pride Month. Russian politician Ekaterina Lakhova thought it “indirectly” promoted homosexuality in children.

After a flag was raised outside the US embassy in June, Putin said it “revealed something about the people that work there,” adding: “It’s no big deal though. We have spoken about this many times, and our position is clear.

“Yes, we passed a law banning the propaganda of homosexuality among minors. So what? Let people grow up, become adults and then decide their own destinies.”

Speaking to Novaya Gazeta – the publication who first broke news of Chechnya’s abominable ‘gay purge’ – Donskoy said he hoped it would send a clear message to Putin, who is notorious for his conservative stance on LGBTQ+ rights.

In June 2013, the president introduced the “gay propaganda” law to uphold “traditional values,” which bans the promotion of “nontraditional sexual relations to minors” including Pride parades. It has also caused an increase in homophobic violence and has been used to jail LGBTQ+ people.

According to The Moscow Times, Donskoy’s demonstration, which he called ‘LGBT Over The Kremlin,’ was also flown to highlight the destruction of his art gallery in the centre of Moscow, for which authorities have no suspects.

The artist, who served as the mayor of Arkhangelsk between 2005 and 2008, came out as gay in 2017 and has repeatedly used his platform to protest and raise awareness of Putin’s crimes against the LGBTQ+ community.

Earlier this year, Donskoy caused controversy with four giant paintings of the politician in central Istanbul, “to draw attention to how Putin is taken in Russia: like a superhero.”

At the time, he said he will take his art to “countries of Western democracy” to show that “Russian people considers sanctions against Putin like sanctions against themselves,” calling himself an “ambassador of peace”.