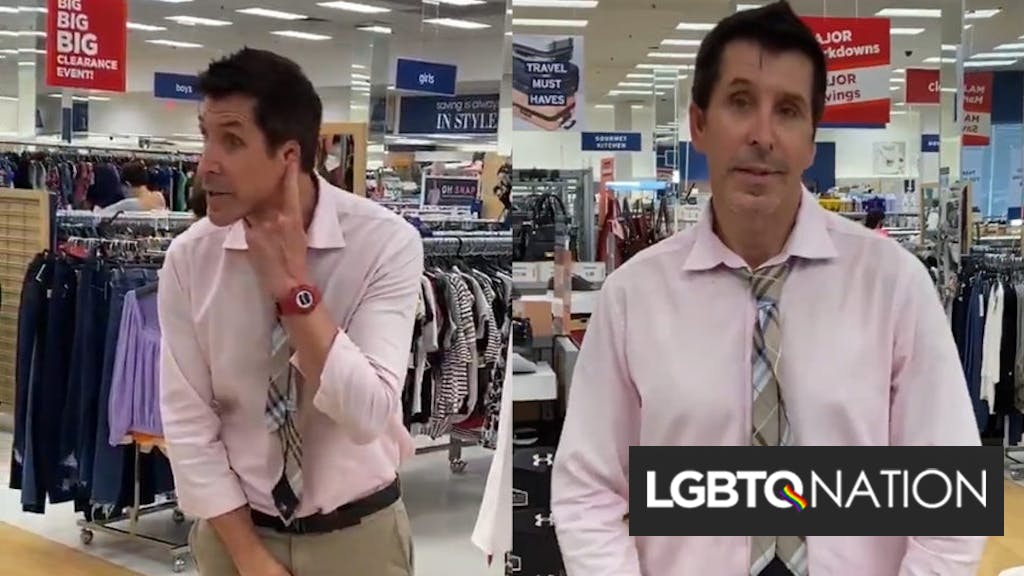 Former talk show host Tim Gaskin has become the latest face of the anti-mask meltdown crowd after a video surfaced of the gay man calling a Marshall’s department store employee a “f**got” and exposing himself to staff and other shoppers.

Gaskin, 52, spews nonsense and quotes fake laws while holding a McDonald’s cup in a deranged incident shared on social media. The clip quickly went viral as one of the most shocking responses yet to the important coronavirus prevention measure meant to protect lives.

Related: A transphobic veteran returned from war & refused to wear a mask. He died on the Fourth of July.

Gaskin previously hosted an LGBTQ talk show, OUT Spoken, on a San Francisco public access channel. He hosted other shows as well and published a magazine focused on philanthropy.

After an employee asked Gaskin to leave the store because he wasn’t wearing a mask, he refuses to leave the store. Turning to the man recording his meltdown, he asks, “You dumb fucking f**got, what’s your problem?”

“What’s your dumb fucking gay problem? You don’t know the law? This is how stupid you are.”

Gaskin cites fake laws and claims that forcing him to leave would result in a $75,000 fine in a desperate and deranged attempt to without wearing a mask. He also claims to be disabled.

After the employee asks Gaskin for his name, the petulant man opens his fly and exposes his penis to the store while staring blankly at the camera.

“Look up the law and put [this video] right next to the law,” Gaskin said. “’Here’s the law and here’s the idiot that filmed me.’ It’s gonna be a whole epiphany for you.”