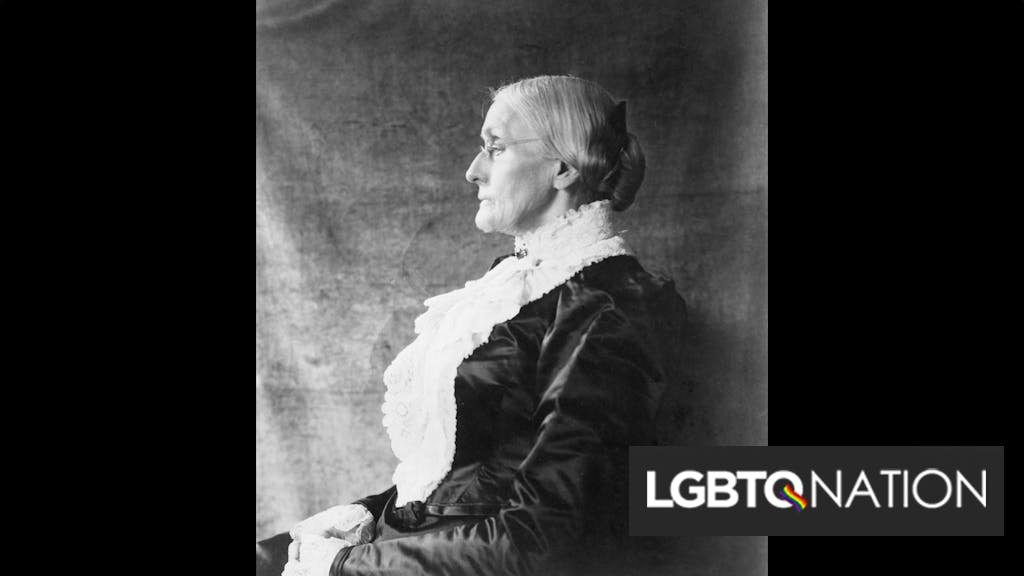 Donald Trump said that he is going to issue “a full and complete pardon” for lesbian suffragist Susan B. Anthony. Today is the 100th anniversary of the ratification of the Nineteenth Amendment, which extended the right to vote to women.

But there’s just one thing: Anthony never said she wanted a pardon.

Related: Susan B. Anthony was a lesbian hero but they don’t teach you that in history class

“She was never pardoned. What took so long?” Trump asked when he announced the pardon earlier today, adding that Anthony helped other women get pardons but “she didn’t put her name on the list.”

Some people are arguing that she never asked for a pardon because she didn’t want one.

In 1872, Anthony was arrested for voting in Rochester, New York, in violation of state law. She argued that the 14th Amendment gave her the right to vote at her trial, but the judge ordered the jury to return with a guilty verdict and he gave her a $100 fine. She never paid it.

Anthony “was proud of her arrest to draw attention to the cause for women’s rights, and never paid her fine. Let her Rest In Peace,” tweeted New York Lt. Gov. Kathy Hochul (D), asking Trump to rescind the pardon.

As highest ranking woman elected official in New York and on behalf of Susan B. Anthony’s legacy we demand Trump rescind his pardon.

She was proud of her arrest to draw attention to the cause for women’s rights, and never paid her fine. Let her Rest In Peace, @realDonaldTrump.

“Susan B. Anthony did not want to be pardoned,” tweeted out former Rep. Katie Hill (D-CA). “She was very pointed about this. Not until all women had full equality (which we still don’t have).”

“Unsurprisingly, Trump is putting on a show to pretend he cares about women but doesn’t give a shit about what women really want.”

Trump even pointed out that she never put her name forward for pardon even when she did for other women BECAUSE SHE DIDN’T WANT TO BE.

Unsurprisingly, Trump is putting on a show to pretend he cares about women but doesn’t give a shit about what women really want.

Others noted that a pardon can be seen as an admission of guilt.

On behalf of Susan B. Anthony and women everywhere – I reject the pardon by the sexual predator, Trump

In 1915, the Supreme Court wrote in Burdick v. United States that a pardon “carries an imputation of guilt; acceptance a confession of it.”

The Seattle Times noted the timing of the pardon, several months before the general election and after polling showed that his support among suburban women has dropped since the last election, especially in battleground states. His campaign has also launched a “Women for Trump” bus tour.

During the same press conference where he announced the pardon, Trump reiterated his opposition to mail-in voting, which some states want to make universal in the face of the coronavirus pandemic.

Born into a Quaker family, Anthony never married and never had a serious relationship with a man, swearing off men in her diary at age 18. She would later be described by writer Victoria A. Brownworth as the “most famous lesbian in America in the 19th century.” Her flirtatious – and loving – letters to women remain a testament to what was an open secret at the time.

Anthony is one of the best-known suffragists in U.S. history. As a teen, she was active in the movement to abolish slavery and later became active in the temperance movement.

In 1878, she and Elizabeth Cady Stanton worked to get the constitutional amendment introduced in Congress, but she passed away years before it was ratified in 1920.

At her trial years before the amendment was presented in Congress, Anthony gave one of the most famous speeches in U.S. history at the trial, where she said the court has “trampled under foot every vital principle of our government. My natural rights, my civil rights, my political rights, my judicial rights, are all alike ignored.”

She would go on to publish a book about the trial to help bring national attention to the movement for women’s right to vote.