Being Out is a feature that looks at LGBTQ people in sports who have come out since Outsports first published in 1999. Today: Runner David Gilbert.

David Gilbert has always has a strong sense of self and that was never more evident than in 2015 when he came out as bisexual on Facebook, a brave thing to do for someone raised as a Jehovah’s Witness.

“Growing up as a Jehovah’s Witness, I have been told many times whom I can and cannot be,” Gilbert wrote. “There are so many standards set by both society and the religious community in regards to what is ‘right or “normal.’ We are told from a very young age how to do right in our lives and sometimes that means changing parts of who we truly are in order to fit in. It has taken me awhile to realize that this is truly a devastating way to live. This past year it’s been slowly hitting me that I cannot fight who I really am anymore. It’s a battle that I’ll never win. This being said, I have made the choice to stop battling who I really am in order to make others happy.

“I would like to let everyone know that I, David James Gilbert, am bisexual.”

Gilbert’s coming out story resonated with readers, many of whom were raised in religions intolerant of LGBTQ issues. Gilbert was among the LGBTQ athletes featured in Jeff Sheng’s “Fearless” project.

Gilbert has graduated from college after competing in cross-country and track and now lives and works in the Seattle area. He is still very much focused on sports and has advice for athletes struggling through the COVID-19 pandemic.

“Life is weird right now,” Gilbert says, “I believe that two types of athletes will emerge from this pandemic — those who used this time to better themselves and those who wasted it. I hope that you choose wisely.”

Here are Gilbert’s answers to our Being Out questions.

What do you love the most about running?

Growing up in a very sports-minded family, I was raised to be both athletic and competitive. As someone who wants to win at everything, playing sports became a driving force in my life. Running became a huge passion of mine because it requires a competitive attitude to succeed and it forced me to push myself harder than I thought possible.

It is not a sport where you can piggyback off your teammates. You can depend on them for the team’s success, but not for your personal success. At the end of the day your team is only as good as your worst athlete. I was also lucky enough to work with several different coaches throughout my running career who helped equip me with the tools necessary for success.

One of the most important and valuable things I learned from my experience as a runner is that the boundaries we set for ourselves are just that — boundaries. Running teaches you that you can do anything. I learned what the human body is truly capable of, and I realized that the hardest obstacles that we need to overcome are the ones that we place ourselves.

If you had told me as an early high school athlete that I would one day be running a sub- 5-minute mile consistently, I would have never believed you. This is a lesson that changed my mindset and led to many successes in my life.

What does it personally mean to you to be LGBTQ+ in sports?

Anyone who is not a straight white male is looked at a little different.

It means you have to set a higher standard for yourself. You always have to be on your A game. In my opinion, anyone who is not a straight white male is looked at a little different.

LGBTQ+ athletes are often subject to more judgement and criticism — both on and off the field. This is incredibly unfair and can be quite disheartening, but I always try to turn negatives into positives. I have always taken this as a challenge to do better in both my personal life and my athletic career.

I don’t allow the opinions of others to hold me back — rather, I use them as a motivator to push myself and set personal standards for how I treat myself and others. I am proud to say that my commitment to being my authentic self both on and off the track has led to very close relationships with my teammates and has also enabled them to have a better understanding of the LGBTQ+ community. 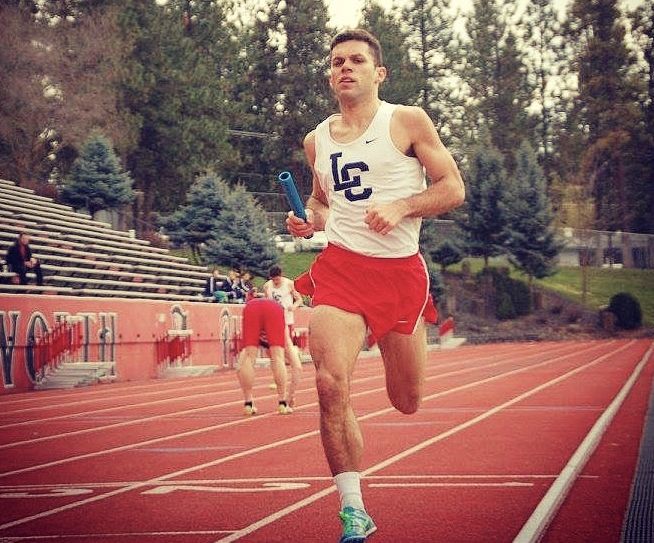 David Gilbert says “my commitment to being my authentic self both on and off the track has led to very close relationships with my teammates and has also enabled them to have a better understanding of the LGBTQ+ community.”

The most valuable piece of advice that I can give is to live your truth and be your authentic self. The road to accepting and being comfortable with yourself can be a long and difficult one — but it is also the most rewarding.

I spent far too much time lying awake at night debating if the way that I felt was a choice and whether or not I should be open about it. The day that I came out and was finally open about who I was, I felt that a weight had been lifted off my chest. I had carried that weight for far too long, and it prevented me from reaching my full potential in all avenues of my life. I truly believe that I would have become a better athlete if I had been open about who I was at an earlier age.

I know it’s not always possible for someone to come out — but if you can, I really encourage you to do so. I would recommend creating a plan of action and following that road map — it worked well for me once I finally created that. The good news is you aren’t alone. Find someone who you can confide in, someone that supports you. The LGBTQ+ community and other communities are full of people who understand you and can provide support or help you navigate your situation.

I’ve always been inspired by LeBron James in the sense that he is one of the greatest athletes in the world and that he uses his platform to push for equality. Juggling a personal life and an athletic career is difficult enough. I really admire that LeBron uses his voice to help advocate for social justice. It can be easy to get caught up in your own life and not always speak up when you should. Watching him push people out of their comfort zone and challenge their beliefs really inspires me to be a better person.

What are you passionate/excited about right now?

Right now, I am very passionate about politics and what is going on in our country. The events occurring right now are going to shape the structure of America in the coming years. I feel that each day brings a new conspiracy theory and it is so important for us to understand and be able to separate the truth for the sake of younger generations and the future of America.

My 2017 outdoor track season was a very memorable one for me, but one race in stands out in particular. My best friend and I placed a bet a few nights before a race at Washington State University. He bet me that I could not run under a certain time — a time that I had never come within five seconds of before (for a mile race, this is a decent jump).

During this race I came through the half-mile about 15 seconds faster than I normally do, so I knew I was well on pace to hit this PR. However, anyone who has raced competitively before knows that when you come through that fast, you have the potential to freak yourself out. During the race I kept looking up at the stadium clock and knew that it was something I could do if I really dug deep. In the end I beat the time by .08 seconds. It was a huge moment in my career and something I think about often.

David Gilbert is an accounting and finance recruiter in Bellevue, Washington. He competed in cross-country and track and field at Lewis-Clark State College in Idaho. He can be reached via Instagram; Twitter; Facebook or email (davidgilbert1993@hotmail.com).

If you are out in sports in any capacity as openly LGBTQ and want to be featured in Being Out, drop Jim an email (kandreeky@gmail.com).

If you’re an LGBTQ person in sports looking to connect with others in the community, head over to GO! Space to meet and interact with other LGBTQ athletes, or to Equality Coaching Alliance to find other coaches, administrators and other non-athletes in sports.