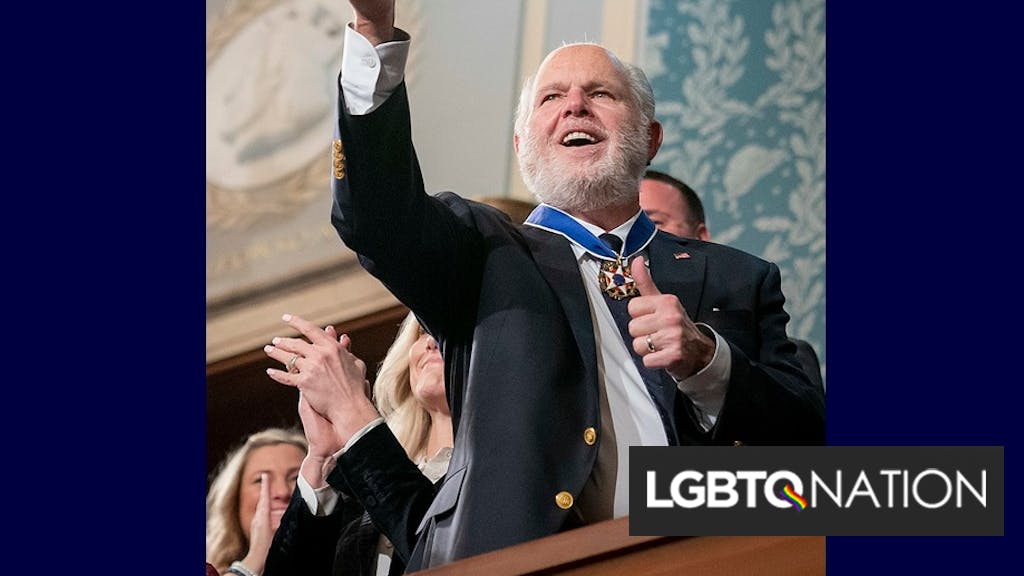 Republican talk show host Rush Limbaugh is drawing fire after referring to vice presidential candidate Sen. Kamala Harris (D-CA) as a “hoe” and a “mattress,” while claiming she “slept her way up.”

Limbaugh, who was given the Presidential Medal of Freedom by Donald Trump during this year’s State of the Union address, spent a portion of his show on the sexist slurs. First Lady Melania Trump hung the medal around Limbaugh’s neck.

Related: Donald Trump launches birther attack on Kamala Harris. She was born in the United States.

The religious right and GOP mouthpieces have used LGBTQ people, our sex lives, relationships, and genitalia for decades to sway their base of evangelical Christians and conservative voters. The Republican Party platform contains multiple outrageous attacks on LGBTQ people, women’s rights, and reproductive health.

An article on the conservative website The American Spectator, “Why It Should Matter to Women That Kamala Harris Slept Her Way Up,” accuses the vice-presidential candidate of having a long-term relationship with Willie Brown, a former speaker of the California Assembly and mayor of San Francisco.

Talking about former NBA photographer Bill Baptist – who was fired after he wrote an offensive post about Harris that showed a photo of her with Democratic presidential candidate Joe Biden captioned with “Joe and the Hoe” – Limbaugh took it even farther when he tied the two topics together.

“It’s no secret, but public knowledge that Kamala Harris slept her way up into California political life by being a very public escort and mattress for California Democrat kingmaker Willie Brown,” Limbaugh said.

“Now some people read this story, ‘Mattress? Didn’t he mean mistress?’ No, I think they meant ‘mattress’ here. I think — Dov Fischer is the author of the story. So we have two different stories here that are trading off the known fact that she was Willie Brown’s mattress, and that he has written about it, and that he has talked about how it propelled her — that he ended up being one of her mentors.”

Religious right pundit Lance Wallnau, one of the staunchest supporters of the president, told his listeners that he had a dream he had about riding in an elevator with Harris that showed him that she’s a sex-obsessed demon.

“We’re going to fight in the spirit, and we’re going to mobilize in other ways in order to do what has to be done to keep the devil from his impatient, lusting, grasping, premature seizure of power. I’m telling you, Kamala is Hillary 2.0. It’s the Jezebel spirit 2.0, and she has no real conscience.”

Jezebel, the wicked queen and wife to the Biblical King Ahab, is condemned in the Christian scriptures for murder, iniquity, and sexual promiscuity.

Another article at the American Spectator is headlined “Kamala the Mattress Did Not Quite Sleep Her Way to the Top” with the subheading, “Only to a major state office that now has brought her just underneath.”