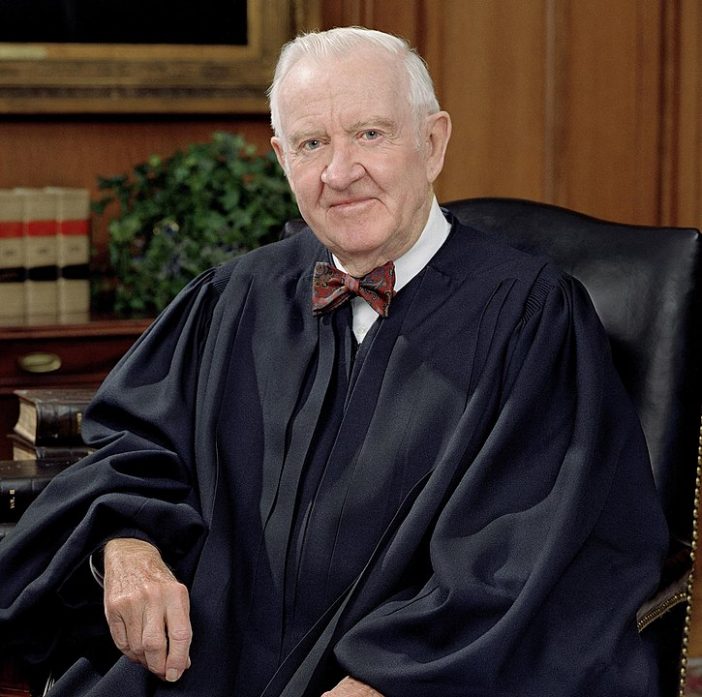 Stevens, who died yesterday at the age of 99, served on the Court for 35 years, retiring in 2010. A registered Repubilcan, Stevens was appointed to the Court by Gerald Ford. At the time, Stevens was considered a conservative–at least by 1970s standards.

But as a justice, Stevens eventually emerged as the leader of the Court’s liberal wing. Nowhere was that clearer than his stand on civil rights, including LGBTQ rights. As the courts increasingly became the battleground to advance LGBTQ rights, Stevens stood as a firm supporter.

That wasn’t always the majority position. In 1986, Stevens issued a strongly worded dissent in the case of Bowers v. Hardwick, in which the Court upheld a Georgia sodomy law, and by extension, sodomy laws everywhere. Stevens complained that Georgia engaged in “selective application” of sodomy laws by only prosecuting gay men, even though the law applied to heterosexuals as well.

The Court finally struck sodomy laws down in 2003. The eloquent majority opinion was written by Justice Anthony Kennedy, who was the strongest advocate for LGBTQ rights on the Court.

Stevens played a role in those decisions by Kennedy: as the senior associate justice, Stevens decided which justice would write the majority opinion. He invariably assigned opinions about LGBTQ rights to Kennedy, thus cementing Kennedy’s legacy as a champion of LGBTQ rights.

Even after leaving the Court, Stevens made clear his support for LGBTQ issues. He was present in the Court in 2015 when it issued its landmark decision legalizing marriage equality nationwide.

A year later, at the age of 96, Stevens wrote an article for the Ohio State Law Journal in which he praised the majority decision. The right to choose your own partner for marriage was, Stevens wrote, “essential to our scheme of ordered liberty—regardless of whether one would choose to marry a person of the same or opposite sex.”

Of course, the current composition of the Supreme Court would make such a ruling today unlikely. After retiring, Stevens was unafraid of making his opinions known, right up to his death. (He just published a book in May.)  He opposed Brett Kavanaugh’s nomnation, saying that Kavanaugh was unfit to be on the Court.

Stevens was a throwback to an era when justices looked to the law for guidance and not to party politics. “It’s harder and harder to believe” that judges aren’t politicians, Stevens told NPR last May.

Anyone who looks at the Supreme Court would have to agree.