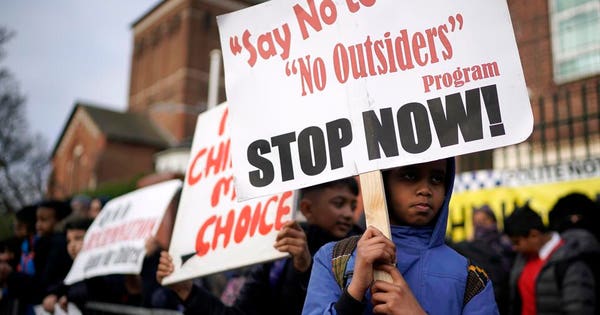 Demonstrators gathering outside Parkfield School in Birmingham, one of the schools affected by protests over teaching children about the rights of LGBT people and other minority groups (Photo by Christopher Furlong/Getty Images)

School leaders have been left high and dry by the lack of government support for teaching children about LGBT issues.

At least 70 schools in England have seen protests against the content of lessons, which aim to introduce children to  the rights of minority groups, including LGBT, and teach them about equalities legislation protecting these groups.

As well as handing out leaflets, protests have included parents keeping their children off school and demonstrations outside schools.

In one instance, a local council was forced to go to court to create an exclusion zone around the school, amid fears for the safety and well-being of children and teachers.

Education Secretary Damian Hinds has come out in support of the schools, saying he “strongly encourages” teachers to talk to students about the existence of same-sex families.

But by leaving the decision of how and when children should learn about LGBT issues up to the teachers, Mr. Hinds has effectively left schools leaders exposed to pressure from discontented parents and activists.

And he has failed to stand up for same-sex parents and children who may be questioning their own sexuality, whose legitimacy and visibility is challenged by the protestors.

The Government’s own advisor on extremism has criticized its response to the row, saying it was too slow to respond and has failed to counter misinformation about what is being taught.

And a prominent rights lawyer said school leaders had been left isolated be failing to take a firm line over the issue and leaving it up to schools rather than mandate what schools should teach.

Nazir Afzal, who prosecuted a number of high profile cases involving sexual grooming of young girls by gangs and was also appointed as a mediator in the row, said the Government should be more prescriptive about what should be taught.

“The Government has pussyfooted around the issue and said it is a local issue for head teachers – and this is where we have ended up as a result, with children kept off school,” he told the BirminghamLive website.

“Most MPs and pretty much every faith leader in the city has said nothing or been unclear, leaving heads isolated,” he added. “Ministers need to be prescriptive and just come out and say what head teachers should do.”

He said leaving it up to school leaders would allow protestors to continue to pick off schools one at a time.

The majority of protests have been at schools with a large number of Muslim children, and Mr. Afzal said it fed into the narrative that Muslims were different and were unable to integrate into a multicultural society.

“This is a multicultural society and children need to have the skills to prepare for that world,” he added.

The lessons are based on the No Outsiders programme, developed by deputy headteacher Andrew Moffatt, and looks at the rights of ethnic and religious minorities, as well as LGBT people.

As well as teaching children about the rights of minority groups, the programme aims to recognize and celebrate diversity and promote a school ethos where everybody feels they belong.