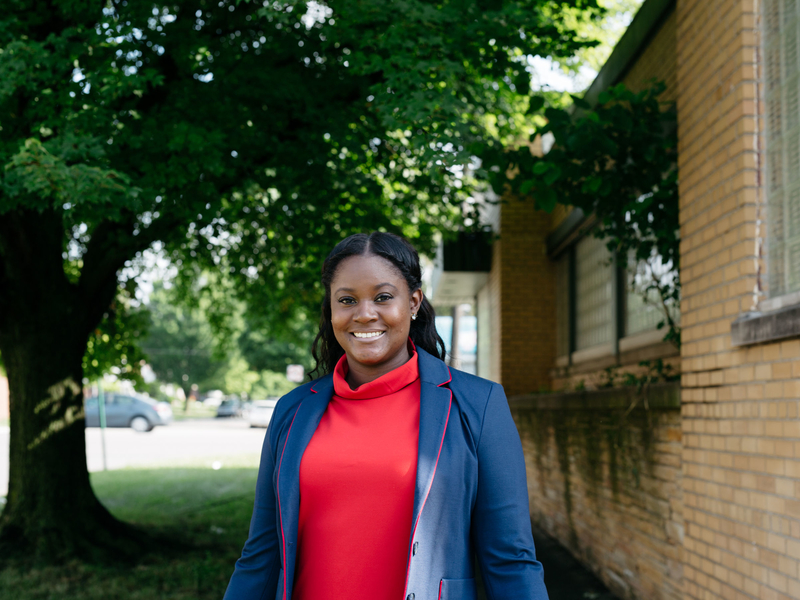 She began her career advocating for children and families who were victims of domestic crimes. Often, the crimes were serious. Sometimes, the victims were even deceased.

She also saw discrimination, especially toward trans women of color.

“Within the city of Detroit, the discrimination, poverty and crime towards trans women of color is horrendous,” Johnson said. “I wanted to see change.”

Johnson now works as the director of Victim Services for Equality Michigan, which was founded in 1991 and aims to achieve equality and respect for all Michigan residents regardless of sexual orientation, gender identity or gender expression. Johnson hired the Detroit-based nonprofit’s victim services team, including Jeynce Poindexter, transgender victims advocate, and Genny Maze, lead victims advocate. Equality Michigan has an operating budget of $870,000 and a staff of four people, including the group’s executive director, Erin Knott.

In her role, Johnson leads advocacy and support services to individuals who have been affected by violence, including from hate crimes. Services include helping victims through criminal or civil legal processes (such as filing personal protection orders) and supporting and filing complaints of discrimination with local, state and federal agencies. She also develops the curriculum for the nonprofit’s training sessions, which include workplace diversity training and understanding LGBTQ communities.

What drew you to social work?

I was born and raised in Kansas City. When I was 14, my parents divorced and I moved with my mom to Detroit. As you can imagine, Kansas and Detroit are completely different environments socioeconomically. I moved from the suburbs into the inner city, specifically Brightmoor. Once I was in the community of Detroit, I saw all the poverty, hardships and what life is like for many people today. I decided I wanted to work in a profession that supported change, both with wide-scale politics and also within my neighborhood and amongst my friends. My initial goal was to help create change with families, youth and children. A few jobs after I graduated, I became the first domestic violence victim advocate at the 36th District Court. That was the beginning of my real social work experiences, seeing those really tragic cases in the city of Detroit.

Was there a particular case that stuck out to you?

When I was at Michigan Department of Corrections, I had a client on my caseload who was a trans woman of color, which means that she was born a male and transitioned to female. When you’re a probation officer, your key duty is to know where your probationer is and where they live. Your goal is to keep the greater community safe. She came in and missed probably two important court dates. I asked her, “What’s going on; where do you live?” I found out she was homeless. It was hard to find housing or a shelter for a trans woman of color. There weren’t any shelters that provided specific spaces for them. I was instructed to send her to the same place that we normally send our male probationers that need housing. I knew at that point I would probably never see her again. I gave her the address of where she was supposed to go. About two weeks later, I called her and went to do a home visit. Obviously, she never showed. Then the next step for me was to write a warrant, but that’s just continuing the cycle. This is someone who could have been provided more understanding, intercessional services.

What led you to Equality Michigan?

While working at MDOC, I saw a lot of the hardships members of the LGBTQ community had just with reporting (providing written documents to verify change in residence, employment, expenses and community service hours) and finding housing. This was especially true of trans women of color. I’d talk to my supervisors and other reporting officers about how they were placed (in housing).

I asked a lot of questions and wanted to know the policies, some of which are pretty distorted still within the state of Michigan. Within that system it’s hard to make changes, but I continued to advocate. While I was there, the position opened up of director of Victim Services at Equality Michigan and I applied.

Tell me about your role now.

I receive about seven new cases a week from different clients that are having issues. They could be having a hard time finding housing, having employment issues or victims of serious crimes. This year in Detroit there has been several incidents of serious crimes, including murders of black trans women of color. We’re also seeing what’s going on in the community and have our ear to the street, which my advocates do as well. We do a lot of training and manage six sites across the state that have pop-up office hours, including in Bay City, Traverse City, Holland and Grand Rapids. For example, we have pop-up office hours in Grand Rapids at Mel Trotter Ministry Shelter, which dedicated a whole space in their shelter for the transgender community. Then we have the Grand Rapids Pride Center, which is where the whole general LGBTQ community would go for any type of services.

How do you hire?

I knew I needed to hire employees that looked like the community. When I found Jeynce Poindexter, she was already an advocate within the community. I saw her speak at a community meeting in Palmer Park when I approached her about the position. She did an excellent job connecting with the community. There are a lot of services and agencies in the city of Detroit that claim they provide services for the LGBTQ community, but they’re not really out there promoting themselves, touching the community and providing accessible resources. She talked a lot about that as well. When I look for employees, I want to hear that they have a passion for what they do, that they’ve done their homework and know the areas that need assistance. Genny Maze, our lead victims advocate, was referred to me. I met her at a Panera Bread just to have a conversation with her, and you could see where her heart was. They’re the hardest working employees, and I haven’t had any turnover yet. I’m the longest-standing employee here at Equality Michigan, and my team is also the longest-standing.

Is there an issue in the LGBTQ community you wish people were noticing right now?

Support and resources for LGBTQ seniors. They face discrimination in nursing homes, senior housing and within the workplace. A lot of times as the community ages, their resources dwindle. That’s an area that I am hoping to build back up.

What do you find most rewarding about your career?

When I go to areas in Michigan that are historically known for their discrimination against black people and gay people. I went to Howell with my trans advocate for a training session, and we got some looks. Then we shared our stories, desires and goals for Michigan to become a place that’s welcoming to everyone and for everyone. We talked about having the same resources, rights and abilities to be happy, safe and raise families. We talked to these groups of people who might not have been welcoming to us initially, but by the time our training was over, we saw those attitudes change. Those are my most rewarding moments.