On Monday, a Iowa man’s request that charges against him be denied for burning LGBT-related library books was denied. 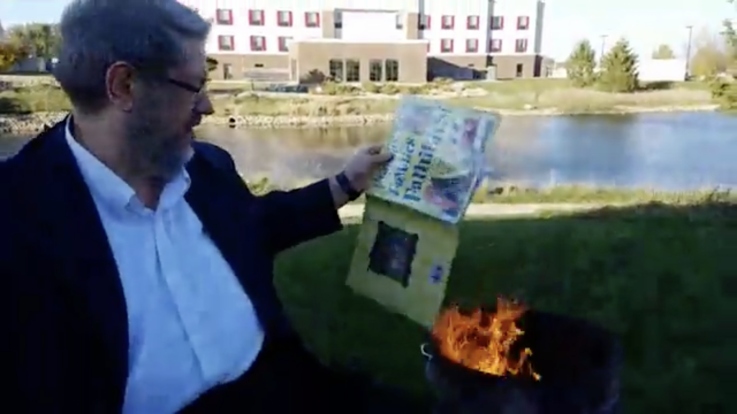 After the due date for the library books passed, Dorr was arrested and charged with fifth-degree criminal mischief, a misdemeanor punishable by a maximum sentence of $625 and 30 days in jail.

Representing himself in court this week, Dorr filed a motion to dismiss his case, arguing arrest violated his First Amendment rights. Dorr also said that he was being specifically targeted as other people who did not return their library books had not been arrested.

In the half-hour long video, Dorr says he was burning the books in protest of a Drag Queen Story Time event held that day at the library. He claims the books he chose were the “worst” in the library.

“This whole [book] is designed to get 12-to-13-year-old boys to start having homosexual sex together,” Dorr says of Two Boys Kissing. “I can’t read you all of this stuff. It is so filthy, and so disgusting.” He then throws the book into a flaming barrel.

Dorr then goes through the other three books and before chucking them into the fire. He claims he was inspired by the 1933 burning of the Institut für Sexualwissenschaft, a German sexology research institute known for its massive library of books on homosexuality and “transsexualism,” a term coined by its founder, Magnus Hirschfield.

“As a result, very ominously, the Nazi youth movement sensed a political opportunity to capture the anger of the common man against Hirschfeld’s movement, and on May 6, 1933, they moved in on his library of perversion.”

Near the end of the video, Dorr proclaims, “I’m going to do right now what the German church leaders should have done in 1933,” before throwing the books in the fire.

He is set to stand trial on August 6.