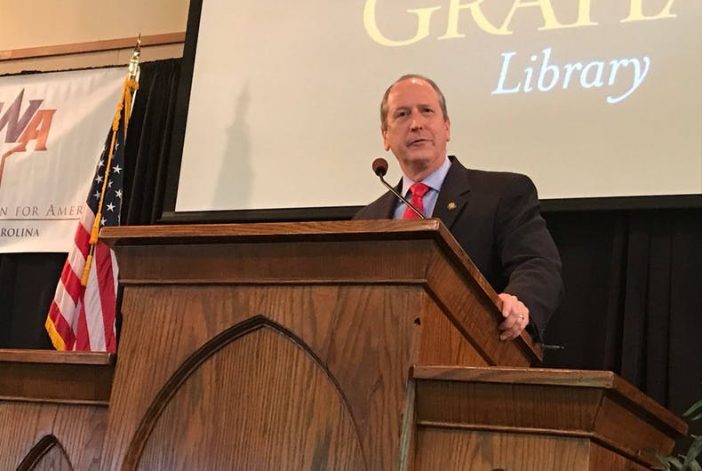 A prominent Republican compared his opposition to LGBTQ equality to saving Jews from death during the Holocaust.

North Carolina Senator Dan Bishop (R) is best known as the architect of HB2, the 2016 bill that banned cities from protecting LGBTQ people from discrimination and required transgender people to use public restrooms associated with the sex on their birth certificates.

In newly uncovered emails between Bishop and the SPLC designated hate group Alliance Defending Freedom (ADF) discussing the religious exemption they wanted to get in to the 2017 bill that repealed parts of HB2, Bishop compared himself to Oskar Schindler, a German business man who saved over 1000 Jewish people from being sent to concentration camps during the Holocaust and was the subject of the book and film, Schindler’s List.

Kellie Fiedorek, a lawyer with the hate group, asked if the religious exemption should be limited to creative professionals, since Christian conservatives have been focusing their fight against LGBTQ civil rights legislation on jobs like bakers and photographers.

Related: NC Republican wants to make it a crime to call the former governor a ‘bigot’

“Whom are we attempting to protect here? Just creative professionals?” Fiedorek asked in an email.

“As Oskar Schindler said, as many as we can,” Bishop replied.

The comparison implies several things. First, Bishop is so ignorant of history that he believes that getting a fine for breaking the law is comparable to an attempted genocide that resulted in the deaths of six million Jews.

Second, it means that LGBTQ people are Nazis because… they don’t like to be discriminated against.

In 2017, Bishop invested money in a social media platform called Gab, which was used by far-right extremists. The Tree of Life Synagogue shooter had an account on the site that said “jews are the children of Satan.”

Bishop said that it was a “smear” to say that his investment tied him to the content of the website, which billed itself as a social media platform that wouldn’t ban people for hate speech.

But if he wants to be the next Oskar Schindler, he could take more care about whether his investments are being used to promote violence against Jews.

Bishop is currently running in a special election for U.S. House against Dan McCready (D).