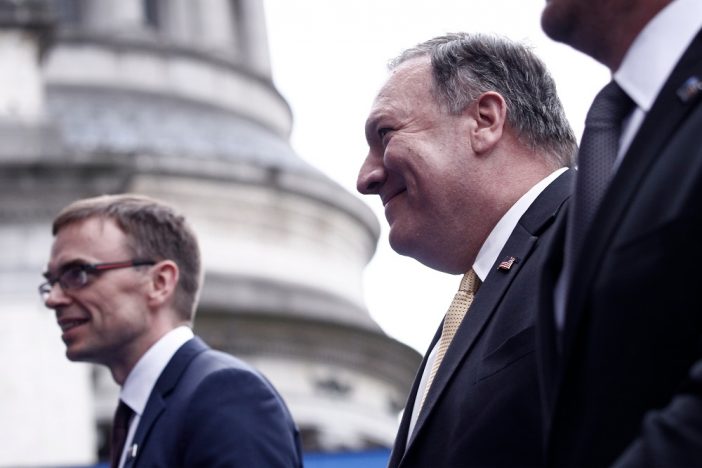 Secretary of State Mike Pompeo announced a new commission that he said will decide which human rights are more important to U.S. foreign policy.

The new Commission on Unalienable Rights will answer questions like “What does it mean to say or claim that something is, in fact, a human right?” and “How do we know or how do we determine whether that claim that this or that is a human right, is it true, and therefore, ought it to be honored?”

Pompeo said that the commission would conduct “one of the most profound reexaminations of the unalienable rights in the world since the 1948 Universal Declaration” of Human Rights.

“Words like ‘rights’ can be used for good or evil,” he said.

Critics said that the commission appears set up to reduce weaken human rights, especially the rights of immigrants, LGBTQ people, and women.

Glendon is a conservative law professor who “writes forcefully against the expansion of abortion rights.” She also doesn’t much like LGBTQ equality and wrote multiple columns against marriage equality.

She called marriage equality “a bid for special preferences” that will suggest that “alternative family forms are just as good as a husband and wife raising kids together.”

In 2004, she also wrote a column for the Boston Herald arguing that the Massachusetts state legislature should pass another ban on marriage equality in the wake of the state supreme court decision that legalized it.

“Secretary Pompeo announced the establishment of his Commission this morning, arguing that ‘basic human rights are misunderstood and manipulated,’” said Menendez in a statement. “These claims are absurd, particularly from an administration that has taken a wrecking ball to America’s global leadership on promoting fundamental rights across the world.”

Menendez also cited the Trump administration’s poor record on human rights as evidence that the commission would be more focused on weakening human rights, not strengthening them.

“The Trump administration continues to support despotic governments abroad while simultaneously ignoring the abuses and rights of children and families on our border,” he said.

“This is an administration that has fawned over Kim Jong-un, embraced Vladimir Putin, praised Rodrigo Duterte, looked the other way as Xi Jinping imprisons millions, and covered up for Mohammed Bin Salman. President Trump’s personal affection for gross human rights violators has stained America’s moral fabric. No Trump Administration commission can erase that.”

In a notice published in the Federal Register in May, the State Department announced that it would create a new commission that would re-examine international law through the perspective of “natural law.” That could well be this commission.

Natural law is a philosophical thought that says that certain rights are inherent to being human, usually endowed by God, insisting that universal moral truths can be arrived at by examining religious texts or an imagined “state of nature.” Natural law as a concept is often used by the right to argue against women’s and LGBTQ people’s rights.

“The Commission will provide fresh thinking about human rights discourse where such discourse has departed from our nation’s founding principles of natural law and natural rights,” the notice from May said.

“These are all things that have been used by extremist people on the far right, to create a gap between what they consider unalienable rights and alienable rights.”