Editor’s Note: We are reposting this story from June 12, 2019, and other recent articles of special interest for the Independence Day holiday.

The whole world seems to be watching the Women’s World Cup, but the attention of some viewers in the United States is more focused on a pre-game ceremony, one in which U.S. Women’s National Team forward Megan Rapinoe has refused to take part: the singing of the national anthem. 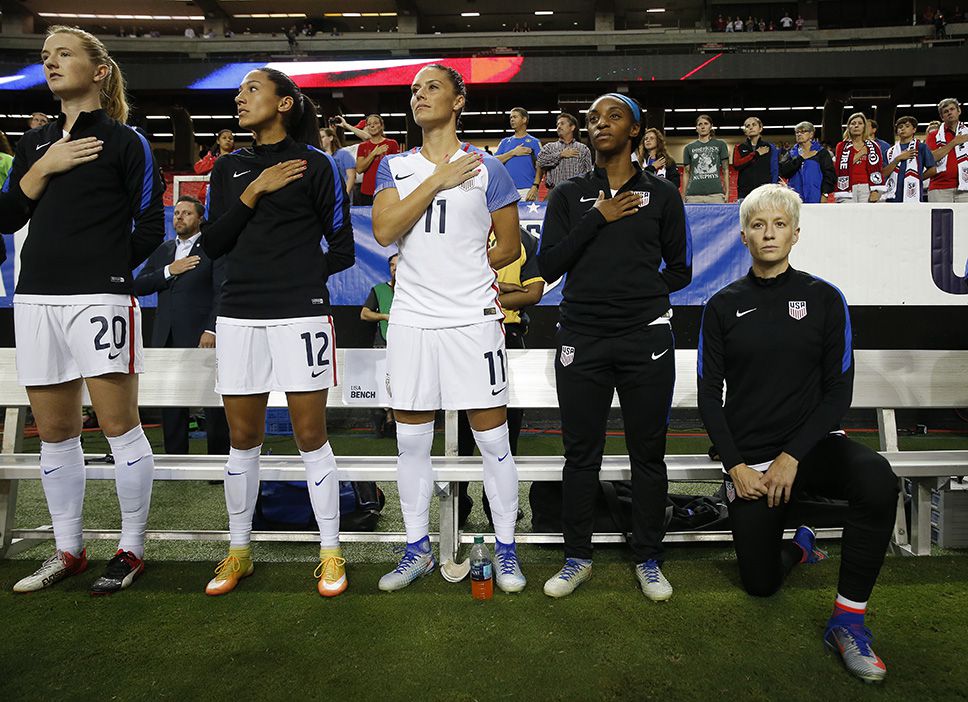 Rapinoe first made headlines in 2016 when she took a knee during the national anthem to support NFL player Colin Kaepernick’s protest of the systemic oppression of people of color in the U.S., the first white athlete and first female athlete to follow his lead.

As a result, soccer federation officials issued a new by-law mandating that players “stand and honor the flag,” a decision Rapinoe derided in an interview last month, calling it “a backwards rule.”

Why? Isn’t she worried about a repeat of the backlash in 2016 that hurt her standing in her hometown, impacted her business and caused so much heartache for her family? All these questions were asked by reporter Henry Bushnell, who also asked Rapinoe: Isn’t it a contradiction to wear the Team USA uniform but not sing the national anthem?

“Not really,” Rapinoe told him. “Because I feel like I’m a walking protest.”

The USWNT co-captain came out in 2012 and ever since has been a fierce advocate for LGBTQ rights and for pay equity. She said prior to the 2016 election, “things got kind of nasty” in America, and she had what she calls an “awakening.”

“Colin Kaepernick very much inspired me, and inspired an entire nation, and still does, to actually think about these things,” Rapinoe said. “The way he spoke about them so clearly, so matter-of-fact, wasn’t trying to convince anyone. Just, ‘This is what is happening, this is what I’m willing to do about it.’ I found that extremely inspiring and convicting. Like, how can you not support?” 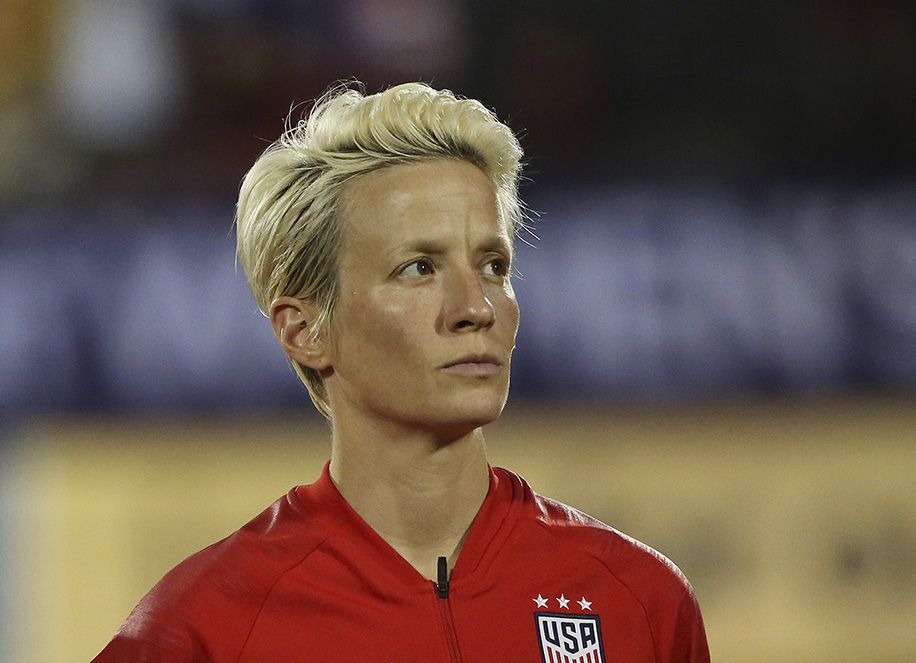 This is from October 2018, when United States forward Megan Rapinoe stood silent during the United States national anthem prior to the first half of a soccer match against Jamaica at the CONCACAF women’s World Cup qualifying tournament in Frisco, Texas, Sunday, Oct. 14, 2018. AP Photo/Andy Jacobsohn

“It wasn’t easy for me,” Rapinoe told Yahoo Sports about the backlash from taking a knee in 2016. “But it shouldn’t be. Whenever you’re trying to be an ally, and it’s super easy and comfortable for you, you’re not an ally.”

”Using this blanketed patriotism as a defense against what the protest actually is was pretty cowardly. I think the NFL does it. I felt like the statement from U.S. Soccer, and then the rule they made without ever talking to me, that was the same as what the NFL was doing – just to not have the conversation, to try to just stop me from doing what I’m doing instead of at least having a conversation, and trying to figure out a [solution] that makes sense for everyone.”

Rapinoe explained she will continue to represent the federation, which incidentally she’s suing for “institutionalized gender discrimination.” And in her interview she specifically lashed out at the Trump Administration for what she called its failure to “value all Americans equally.” Rapinoe described the U.S. as suffering from an epidemic of “atrocities … extreme poverty … homelessness … mass incarceration … discrimination against people of color, and police brutality.”

From The Hill to Fox News to The Daily Caller, right-wing media and conservative social media users have once again targeted Rapinoe as a result of her choice to not sing, even though any casual observer at most U.S. sporting events will find many athletes and fans who don’t sing along.

Rapinoe actually hasn’t sung the anthem for months, but one thing the Yahoo Sports interview made clear is that she used to sing the Star Spangled Banner, and with genuine feeling.

“With grace and gusto, on fields from Frankfurt to Florida to Montreal, eyelids occasionally fluttering. Her chest would rise and fall with the trumpets on the ‘Star Spangled Banner,’ lyrics rolling off her tongue, patriotism oozing from her entire figure,” wrote Bushnell.

Rapinoe’s mother Denise noted that in addition to the fierce backlash, her daughter received “amazing showings of support” from both the public and their family. But she conceded to Yahoo Sports she wishes there had been another way for her daughter to express her sentiment.

“She’s very patriotic,” Denise said. “We’re a very patriotic family. Her dad was drafted during the Vietnam War. … Her grandfather, who lives with us, he’s 94, World War II vet. My father, Korean War, suffered many injuries. I mean, we have a long family history of service to the country.”

Ultimately, Megan Rapinoe said she does not sing the national anthem because she is “a walking protest when it comes to the Trump administration,” and because her silence is emblematic of “everything I stand for.”