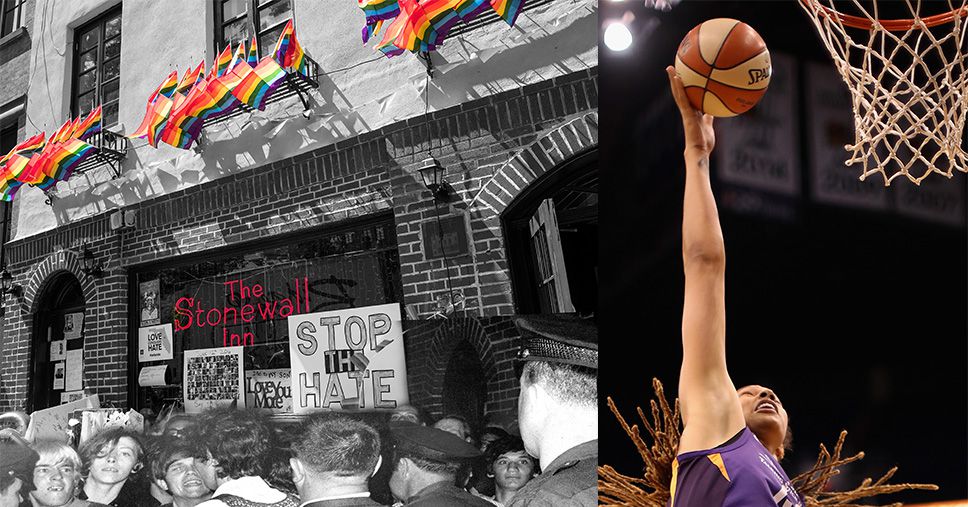 In commemoration of Pride Month and the 50th year since the Stonewall Inn riots in New York, Outsports is profiling one out athlete daily who embodies the “Stonewall Spirit,” reflecting the courage of those who launched the modern LGBTQ rights movement.

When it comes to playing college and professional basketball at a level approaching perfection, there are few players — men and women — who can equal or surpass Brittney Griner in performance, skill and natural talent.

But… Nobody is perfect. Not athletes, not coaches, and certainly not referees, umpires and sportswriters.

So it will shock no one that Griner’s history has some rough edges to it. She’s 6’9” and recalled in an essay in The New York Times that she was relentlessly bullied, endured racist slurs and repeatedly misgendered.

“The teasing about my height, appearance and sexuality went on nonstop, every day.

“People called me a dude and said there was no way I could be a woman. Some even wanted me to prove it to them. During high school and college, when we traveled for games, people would shout the same things while also using racial epithets and terrible homophobic slurs.

“I’ve had moments when I questioned my place in the world. At times, especially in seventh grade, life was lonely and I’d often feel sad. I never wanted to deny who I was, but dealing with the sadness and the anger that came from people constantly making fun of me wore me down at times. I relied heavily on my mom, family and friends to lift my spirits and help me through it — and still do.”

She came out to her mom in ninth grade, and when she revealed this truth about herself to the world in April 2013, there was little fanfare, coming as it did on the heels of Jason Collins’s announcement. Griner told Sports Illustrated at that time that she never felt it necessary to say anything publicly before. This was shortly after being the top pick in the WNBA draft by the Mercury.

“I wouldn’t say I was hiding or anything like that,” Griner said. “I’ve always been open about who I am and my sexuality.”

And to The Times: “Just as basketball doesn’t define who I am, neither does being gay.” She would much rather discuss skating or bacon, she said,

It was a month later in 2013 that Griner revealed she had been silenced about her sexuality. Baylor Coach Kim Mulkey was fully aware of her star player’s sexual orientation but did not want it out in the open, for fear it would hurt recruiting.

What hurt Griner, however, was not her love for a woman but the media’s repeated painting of her as a brute, whether it be playing rough on the hardwood or in the context of her first marriage.

Both she and her now ex-wife, Glory Johnson, were arrested in April 2015 for domestic violence. Johnson was with the Tulsa Shock at the time, and is now a Dallas Wings forward.

Glory and Griner have gone on to new relationships, after court battles over the custody and financial support of their twins; Griner is now married to a Baylor alumna, Cherelle Watson.

So like for many people, Griner’s life did not follow a straight line — no pun intended. What matters is not the TMZ gossip machine or mug shots, but how she has overcome adversity to achieve her goals.

That is one likely reason Nike chose her along with other successful athletes to represent the athletic brand in a short video campaign. The latest incarnation of the BeTrue ad shows Griner alongside another WNBA great, Sue Bird, trans athlete Chris Mosier and more.

Their message: “Nobody wins alone,” “No one wins until we all win” and “None of us can truly win until the rules are the same for everyone.”

For Griner, the rules may never be equalized in her favor, in some aspects, given her height and prowess on the court. But in view of what she has overcome already, and somehow kept playing, that degree of perseverance makes her a shining example of “Stonewall Spirit.”

Our “Stonewall Spirit” series concludes tomorrow, Read the other 28 profiles of LGBTQ athletes who showed that incredible ingredient by clicking here for a link to our series.