Most Americans see progress over the last 50 years in ending discrimination against gays and lesbians. Sixty-seven percent now think same-sex marriage should be legal, a record high in CBS News polls. While attitudes have changed and progress has been made, most say at least some gay and lesbian discrimination still exists.

Partisanship, ideology and religion continue to be related to views of same-sex relations and marriage.

Fifty years after the Stonewall uprising, which marked a turning point in the gay rights movement, 84% of Americans think there has been a great deal or some progress in getting rid of discrimination against gays and lesbians. 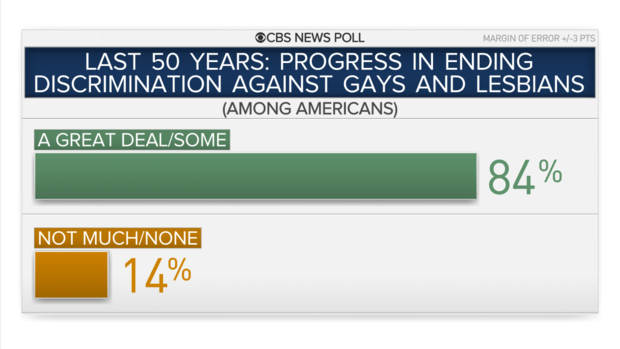 While Americans see progress, most say at least some discrimination against gays and lesbians still exists today, including 44% who think there is a lot of discrimination. 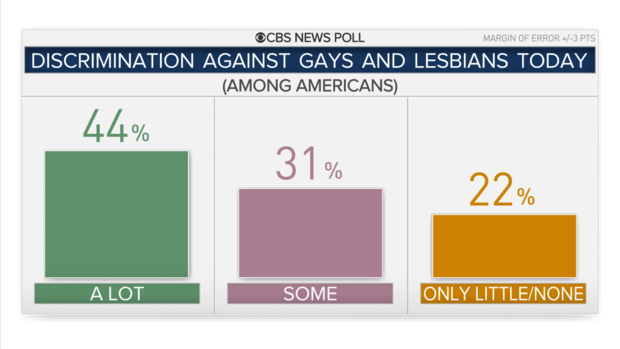 More Americans — 56% — feel there is a lot of discrimination against people who are transgender. That figure rises to 66% among people who know someone who is transgender. 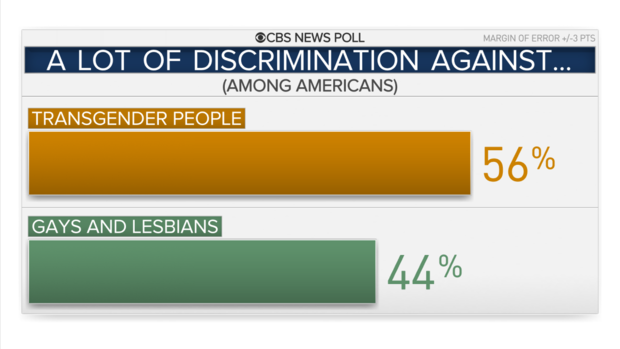 Four years after the U.S. Supreme Court decision that made same-sex marriage legal across the country, support continues to inch up: 67% of Americans now say it should be legal for same-sex couples to marry, up slightly (five points) since 2016 and the highest in CBS News polling. As recently as 2012, a slim majority opposed same-sex marriage. 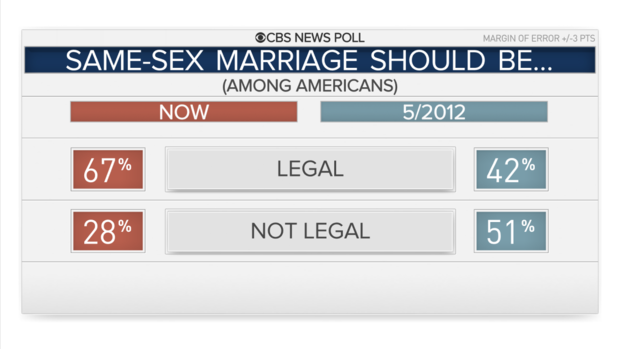 The poll went further and asked people who support same-sex marriage today if they once opposed it, and if so, what changed their mind. Twenty-nine percent choose equal treatment as the main reason for changing their view, closely followed by people should be free to do what they like (26%). Some say they feel they know more about the issue than they did before (22%), or that they know someone who is gay or lesbian (12%) – the percentage of Americans who know someone who is gay or lesbian has risen over the years.

Americans who personally know someone who is gay are far more likely than those who don’t to say same-sex marriage should be legal and that gay and lesbian relations are morally acceptable.

As they have for a while, large majorities of Democrats and independents continue to think same-sex marriage should be legal and support has increased among both groups from three years ago. 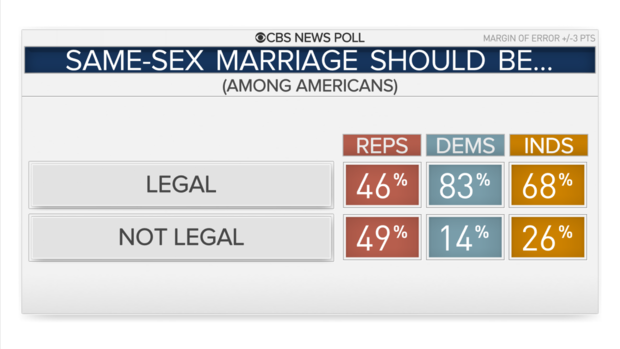 Republicans are divided on the issue as they have been recently, which is a reversal from years earlier when most did not think gays and lesbians should be allowed to marry. That was the case just before the 2015 Supreme Court ruling that effectively made same-sex marriage legal. Today, most conservative Republicans and white evangelicals do not think same sex marriage should be legal. 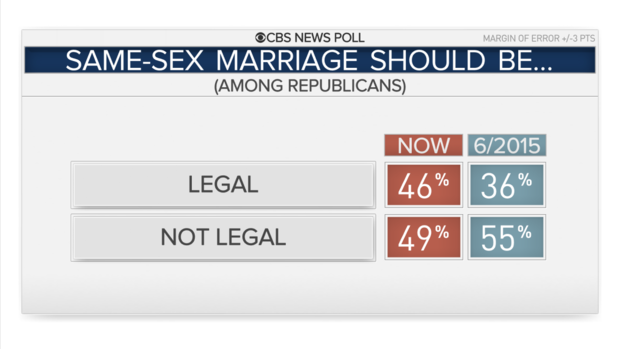 How Americans view gay and lesbian relations have changed dramatically over time. Today, six in 10 Americans say these relations are morally acceptable, while just a third believe they are morally wrong. The Gallup Poll has been asking a similar question about morality and same-sex relations for many years. Just a decade ago, the public was divided in how they viewed the morality of same-sex relationships.  And in the mid-2000s, a majority of Americans said homosexual relations (the phrase used in the question at the time) were morally wrong, according to Gallup polling. 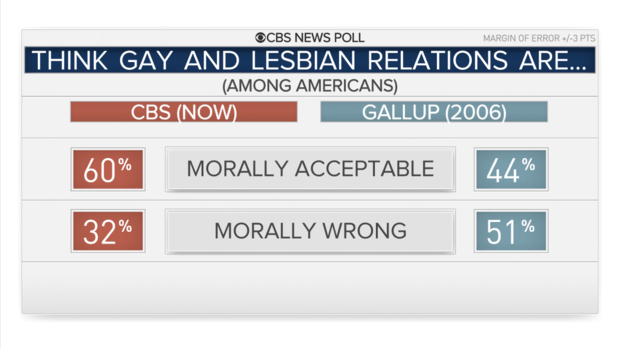 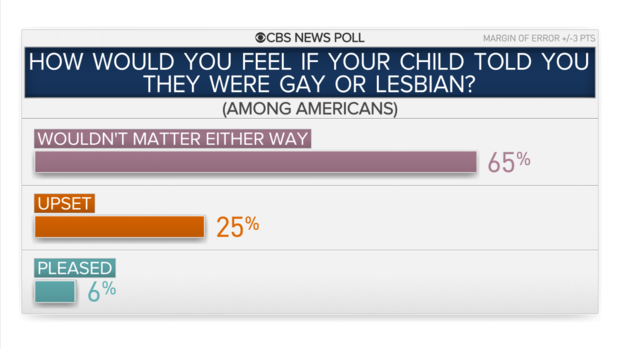 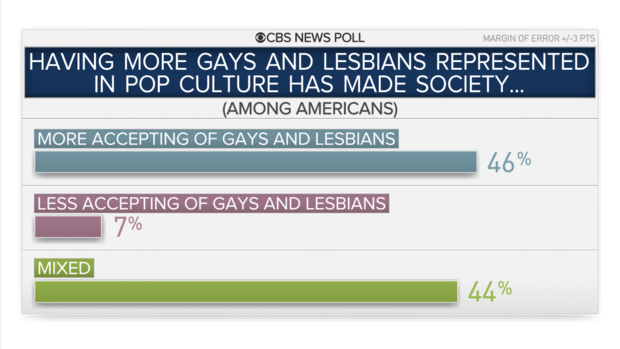 While roughly half of Americans think TV and movies include about the right amount of gay characters, about a third think there are too many.

Is America Ready for A Gay President?

While Americans see progress on the treatment of gays and lesbians in society, just 27% think the country is ready to elect a gay or lesbian president. This figure is up, however, from a mere 7% when Gallup asked this question in 2006.

Still, seven in ten Americans today don’t think the U.S. is ready. There is remarkably little difference across demographic groups.  Majorities of men, women, all age groups and partisan stripes say the U.S. isn’t ready to elect a gay or lesbian to the White House. 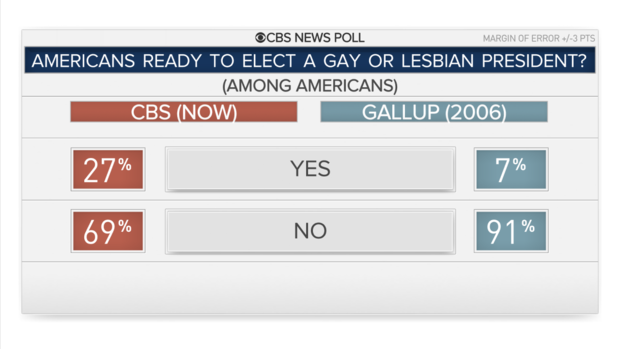 Even though most Americans don’t think country is ready, three in four would be willing to vote for a well-qualified person who was gay or lesbian if their party nominated one, according to a recent poll.