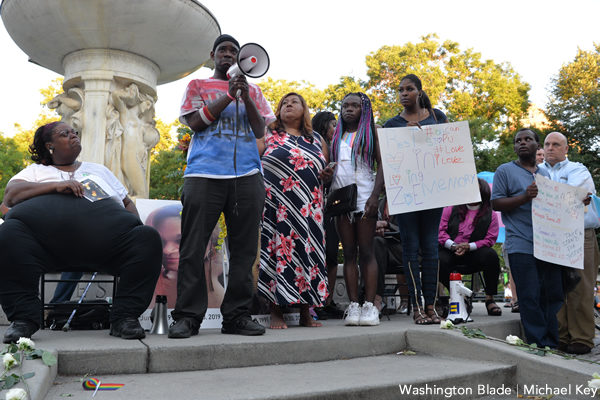 A vigil against anti-LGBT violence was held at Dupont Circle on Friday. (Washington Blade photo by Michael Key)

More than 300 people turned out in Dupont Circle Friday night for a vigil organized by LGBT activists in response to five separate incidents of violence against LGBT people in the D.C. area since June 13, including the murder of a transgender woman.

Several speakers at the vigil criticized D.C. Mayor Muriel Bowser and the D.C. Council for not approving or advocating for a request by a coalition of LGBT groups earlier this year for an additional $3.5 million in the city’s fiscal year 2020 budget for programs that activists say would address the underlying causes of anti-LGBT violence.

In a makeshift stage at the Dupont Circle fountain, vigil organizers placed a large poster size photo of 23-year old trans woman of color Zoe Spears, who was shot to death June 13 in Fairmount Heights, Md., just across the D.C. boarder at Eastern Avenue.

Organizers placed another poster size photo on the makeshift stage of another trans woman of color, Ashanti Carmon, who was shot to death on March 30 a few blocks from where Spears’ body was found in Fairmount Heights.

People who knew Spears and Carmon said the two were friends and that Spears told them she was present in the Fairmount Heights area where trans and cisgender female sex workers congregate when Carmon was gunned down.

Trans activist Ruby Corado, founder and executive director of the D.C. LGBT community services center Casa Ruby, told the crowd assembled around the fountain and the two large photos that Spears had been a Casa Ruby client and referred to Corado as “mom.” 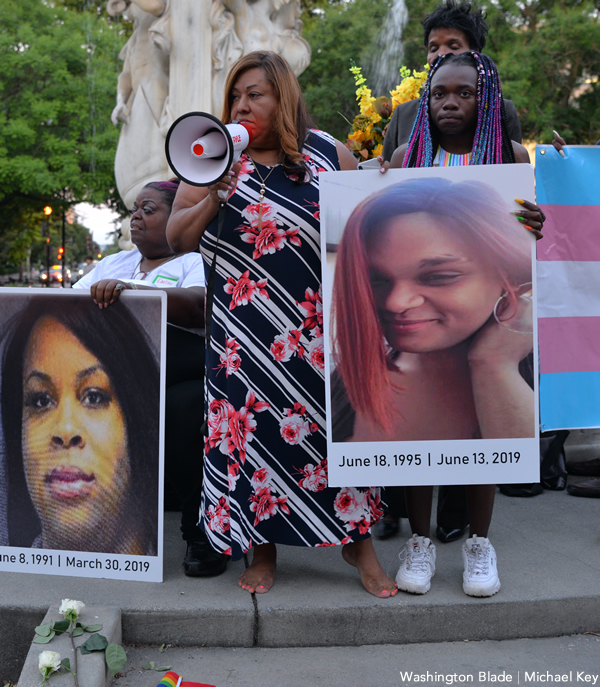 “I want you to look at Zoe’s picture,” Corado said. “This is one of the last pictures I took of her. I want you to look at her smile,” said Corado. “And I want to read her last message to me the week before she died. On Sunday at 12:48 p.m. she said, ‘Hey mom, I’m home … And I love you. Sweet dreams and by the way, happy birthday.’”

According to Corado, on the day before her death Spears sent her one last text message that Corado says she is still trying to understand. ‘Hey mom, can you shoot me $10 so I can eat?”

Corado and others who spoke at the vigil said Spears’ call for money so she could eat was symbolic of her struggle as a trans woman of color to find gainful employment and a sign that existing city programs may be failing trans people in need.

The second of the five incidents during the 6-day period last week involving anti-LGBT violence or threats of violence took place June 15 outside the Casa Ruby offices on Georgia Avenue, N.W. Three trans female Casa Ruby clients reported a man approached them in his car and displayed a gun in the parking lot of a restaurant across the street from Casa Ruby. The women fled the area without being harmed, according to Corado.

A D.C. police report of the incident says the same man a few minutes earlier was observed in the Casa Ruby parking lot by a male Casa Ruby employee. The report says the driver of the car told the employee, “I want my dick sucked, go get me one of those trannies.”

One day later, on June 16, Braden Brecht, 21, and his boyfriend, Karl Craven, 24, were attacked beaten, and robbed by a group of more than a dozen assailants on U Street, N.W., near the gay bar Nellie’s. The attack left Brecht with two broken teeth and stitches in his lip, which he received during a six-hour stay at MedStar Washington Hospital Center, he told the Washington Blade. 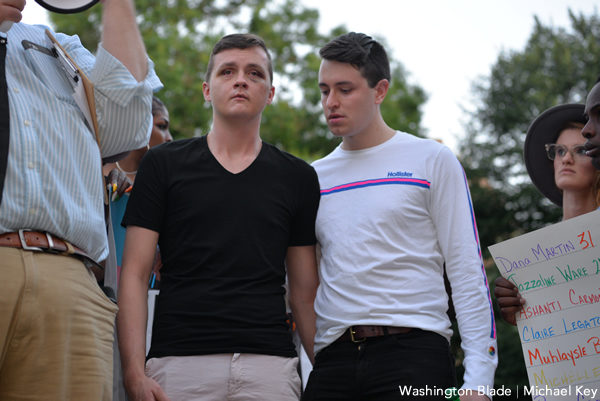 D.C. police, who listed the incident as a hate crime, made three arrests in the case, two juveniles and a 19-year old male identified as Marcus Britt of Fort Washington, Md. The U.S. Attorney’s Office, which prosecutes crimes committed by adults in the District, said it dropped the charge against Britt. A spokesperson said the office typically drops charges when evidence is insufficient to result in a conviction at trial.

The Office of the D.C. Attorney General, which prosecutes crimes committed by juveniles, has declined to say whether the charges are still pending against the two juveniles arrested in the attack against Brecht and Craven.

Also on June 16 D.C. police said three people were stabbed by one or more unidentified attackers inside the Dupont Circle gay bar Fireplace. Police released photos of two male suspects taken by a video surveillance camera and have asked the public for help in identifying the suspects. Police said the stabbings were the result of an argument between the suspects and victims. The injuries suffered by the victims were not life-threatening according to police. 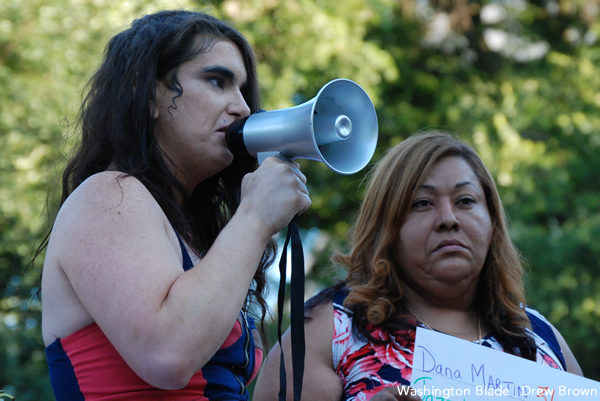 The last of the five recent incidents took place on June 18 when trans activist Emmelia Talarico was assaulted by one of three male suspects who shouted anti-LGBT slurs at her as she was attempting to leave a grocery store in the city’s Eckington neighborhood near where she lives.

A police report says Talarico wasn’t seriously injured. But she has said she and her roommates who live in a house operated by the LGBT and sex worker advocacy group No Justice No Pride became alarmed when one of the three suspects who harassed Talarico at the grocery store apparently followed her and a store employee who drove her home and threw rocks at her house after walking onto the front porch.

The report says someone called 911 and although police did not find the rock-throwing suspect, the incident remains under investigation.

Talarico was among several victims of anti-LGBT violence who spoke at the vigil. She faulted the mayor, the D.C. Council, and other public officials for not supporting the full decriminalization of sex work in the city between consenting adults, saying criminalization of sex work leads to violence against sex workers, including trans women of color involved in sex work.

“No more vigils,” she told the gathering. “We should be angry and screaming in the streets.”

Randy Downs, a gay Advisory Neighborhood Commissioner from Dupont Circle and a member of the recently formed Rainbow Caucus of LGBTQ ANC Commissioners, was among the vigil speakers who criticized the D.C. government for not adequately addressing issues the group said can lead to anti-LGBT violence.

Downs noted that the vigil was taking place two days after ANC Rainbow Caucus members sent a letter to D.C. Council Chair Phil Mendelson (D-At-Large) and other city government leaders calling for the additional funds in the city budget initially called for by 15 LGBT supportive groups earlier this year.

“Our government is failing us,” Downs said at the vigil. “We learned long ago that silence equals death,” he said. “And the silence and inaction of District leaders is killing members of our community or placing them in harm’s way and hospital emergency rooms.”

Added Downs: “We will not be complacent. We will not be silent. And we will hold every single elected leader accountable for their failures.”

Downs blamed the “inaction” of city leaders for some of the anti-LGBT incidents that occurred during the past two weeks, saying LGBT people are “dying of preventable causes” that can be remedied by government action. 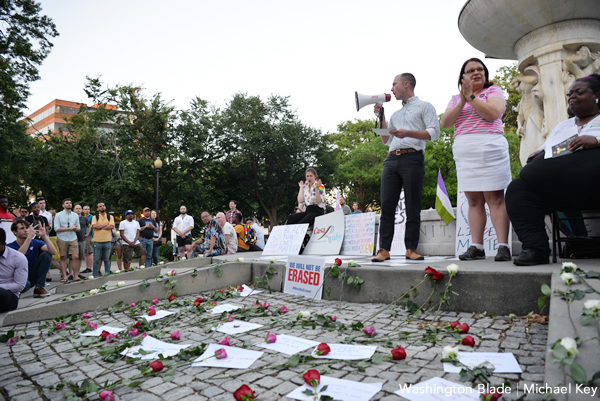 Veteran gay activist Rick Rosendall, former president of the D.C. Gay and Lesbian Activists Alliance, mentioned while speaking at the vigil that he saw Mendelson was present at the event as a supporter rather than a speaker.

Mendelson and LGBT activists have given conflicting accounts of whether the 15 organizations took adequate steps to inform Mendelson and the D.C. Council as a whole about the urgency of their request for the additional $3.5 million in the city’s budget. Mendelson told the Blade in a May 29 statement that he did not see an April 30 letter the advocacy groups said they sent him and his Council colleagues asking for the additional funds.,

“I, of course, would have been more supportive of the community’s call for more resources,” he said in his statement.

But activists familiar with the interaction with Mendelson and other Council members dispute Mendelson’s explanation, saying representatives of the groups testified before two Council hearings on budget related issues earlier this year, where they clearly asked for the additional $3.5 million in funds.

In her remarks at the vigil Corado said she, too, has made requests for city funds for a Casa Ruby employment assistance program for LGBT people in need, especially trans people. She said both the mayor and Council rebuffed her funding requests for that particular program, although she said Casa Ruby has received city funds for other programs.

Sheila Alexander Reid, director of the Mayor’s Office of LGBTQ Affairs, to which the activists want $3 million of the $3.5 million they are seeking to go, has not immediately responded to a request by the Blade seeking her and the mayor’s position on the activists’ request for the additional funds.

The groups seeking the funds want the Office of LGBTQ Affairs to use the additional $3 million for a community grants program to assist LGBT people in need.

In a statement released on the day of the vigil, Bowser said she stands with the LGBT community in its efforts to stop anti-LGBT violence.

“Washington, D.C. is a city of love, inclusivity, and diversity,” the mayor said. “As a community, we are proud to be guided and defined by those values, and when those values are attacked — when members of the LGBTQ community are harassed, hurt, or targeted in violent crimes in or near D.C. — it should cause every single member of our community to pause and reflect on how we can do better,” she said.

“Today and every day, we must stand together in rejecting bigotry, in doing more to support and protect trans women of color and in looking out for our LGBTQ youth and other vulnerable populations,” she said.

In a separate statement released on Friday D.C. Attorney General Karl Racine said he is committed to aggressively protecting the safety of the LGBT community against hate crimes and other forms of violence.

He said he wanted to make it clear that it was the U.S. Attorney’s Office and not his office that dropped the charge against the 19-year-old man arrested by D.C. police in the attack against Braden and Craven on U Street last week.

“That means we are not even allowed to disclose whether we are prosecuting a juvenile in a case,” he said.

A spokesperson for the Attorney General’s Office didn’t immediately respond to an inquiry from the Blade asking whether Racine would support changing the city’s juvenile justice laws to allow the disclosure of the disposition of criminal cases against juveniles without revealing the identity of a juvenile charged in such a case.

Also speaking was Philip Williams, Ashanti Carmon’s fiancé, who drew loud shouts of support from the crowd as he struggled to overcome his emotions in describing how his life has changed since the woman he loved was murdered on March 30.

“I see couples today and I’m walking alone,” he said.

“We love you!” someone shouted from the crowd. “We are with you,” someone else called out to him.

Drawing similar shouts of support were U Street assault victims Brandon Brecht and Karl Craven, who did not speak but appeared on the makeshift stage after being introduced by D.C. Center director Mariner. The two told the Blade later they were still grappling with the trauma of being attacked and weren’t up to speaking, but they were moved by the love and support they received from the crowd.

“It’s the biggest crowd I’ve been around since it happened,” Brecht told the Blade. “So my anxiety is high but it’s an overwhelming amount of love and so that pushes past my anxiety.”

The Gay Men’s Chorus of Washington received loud and prolonged applause after it sang the civil rights movement anthem “We Shall Overcome”.