UPDATE: Martina Navratilova is now granting interviews in advance of her documentary, “The Trans Women Athlete Dispute With Martina Navratilova,” scheduled to premiere on BBC1 on June 26 at 9 pm. In discussing the film with WhatsOnTV, she talked about why she’s delving into this issue, and also revealed where she currently stands:

“I realized perhaps I don’t know as much as I thought! I have no dog in this fight other than wanting to fight for equality and fairness.”

“I’m meeting a variety of people but at the moment I’m pretty much where I’ve always been, which is, I want to have as level a playing field as possible. I just don’t know how to get to that and it might not be possible to find a solution that makes everybody happy. So I guess do least harm. I’m hoping to get more information so that maybe we can find an equitable solution where you can make a rule and be more inclusive of the transgender community, without displacing women that were born female so that when they’re competing against transgender women they don’t feel it’s an unfair situation.”

You can read more of what Martina Navratilova said at WhatsOnTv. Outsports will have a full report the night of the documentary’s premiere.

ORIGINAL REPORT: Until a few months ago, the announcement that Martina Navratilova had been picked to host an LGBTQ sports documentary would hardly have qualified as controversial. As one of the few out athletes of the 1980s and a trailblazing figure in the fight for gay rights, Navratilova would appear to be one of the first athletes to approach when you want to associate your film with heroism and the fight for equality.

But that was before Navratilova made her infamous (and since deleted) Twitter comments about trans athletes, claiming “You can’t just proclaim yourself a female and be able to compete against women.” And then, after promising to educate herself on the subject in the wake of the ensuing furor, she bizarrely doubled down with an editorial for The Sunday Times of London where she stated:

“To put the argument at its most basic: a man can decide to be female, take hormones if required by whatever sporting organization is concerned, win everything in sight and perhaps earn a small fortune, and reverse his decision and go back to making babies if he so desires. It’s insane and it’s cheating.”

It’s clear that Navratilova has devoted a lot of mental energy to this particular hypothetical scenario, despite the fact that there is no any evidence at all of it happening in real life. To put the argument at its most basic: a man cannot actually just “decide to be female,” dominate the sporting world and then simply “reverse his decision.” But apparently, one of the biggest icons of LGBTQ sports history can decide to be Curt Schilling.

Navratilova’s characterization of transgender athletes wasn’t that far removed from the transphobic meme that got the former baseball star fired from his analyst position at ESPN. And while she subsequently backtracked on the cheating characterization after her editorial caused an even bigger uproar, the damage to her image had been done. 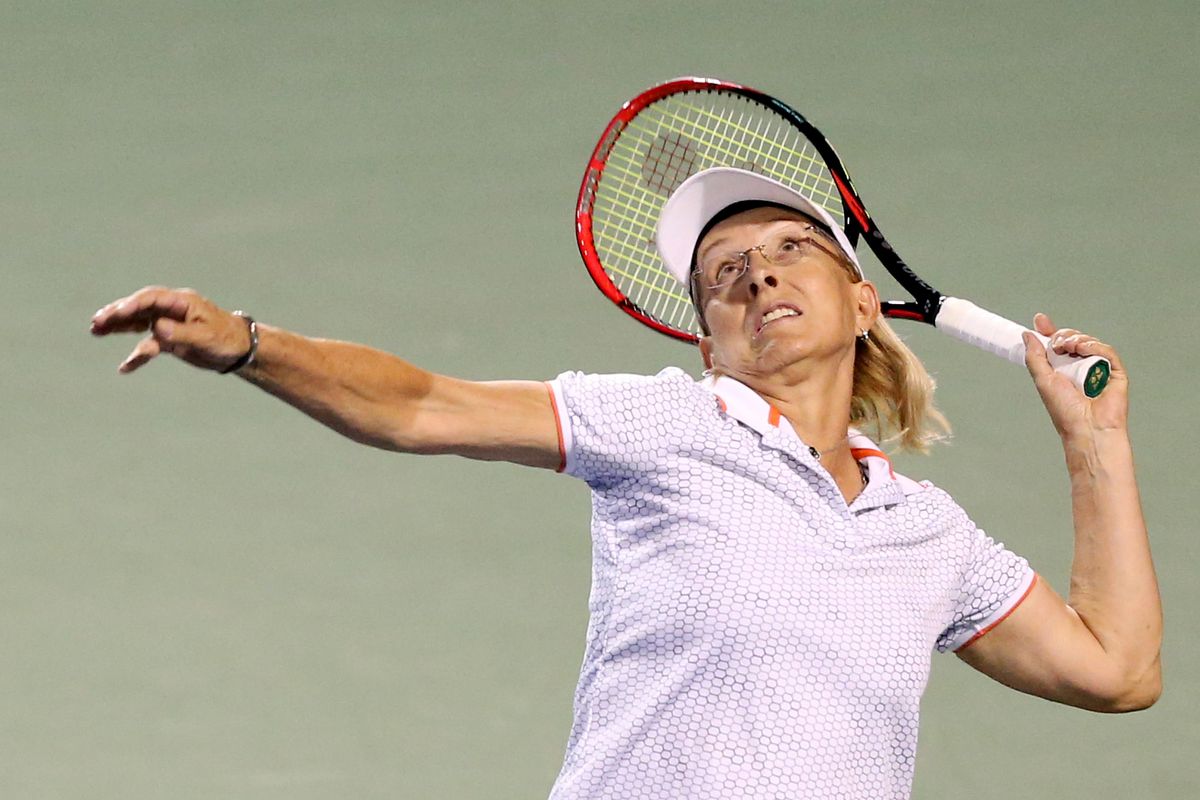 Still errorless on the court. Not so much with a word processor. Photo by Maddie Meyer/Getty Images

Most people would look at a passage like that and think, “Perhaps she’s not the best choice to host a documentary on transgender athletes.”

But her ugly comments did not stop the BBC from picking Navratilova to host a program entitled “Trans Athletes: A Fair Playing Field?” airing next month.

Among those criticizing the decision is the award-winning senior editor in charge of ESPN’s Major League Baseball coverage, Christina Kahrl, who also happens to be a transgender woman.

There are perhaps a few billion people less qualified to do a documentary about #trans athletes than @Martina, but there are literally thousands who are both more qualified and competent to boot. Shame on you, @BBC

Navratilova tweeted in response, cheekily: “Why thank you so much:)” To date, that has been her only public comment on the documentary.

Choosing a figure who has expressed such views as the face of this project obviously accomplished one of the BBC’s goals by creating a buzz surrounding it. In a statement to Outsports, a BBC spokesperson attempted to justify their decision by portraying it as part of Navratilova’s personal journey:

“Martina is setting out to explore the issues that are creating the current debate and find answers to some of her own questions in an open and constructive way. She will examine all sides of the debate, meeting a range of people with different views, experiences and expertise during the course of the film.”

It should also be noted that just over a year ago, Navratilova and the BBC were embroiled in a bitter public feud over gender pay equity, when it was revealed the British broadcaster paid John McEnroe 10 times what it paid her for their roles in Wimbledon coverage. The BBC denied it was because Navratilova was a woman, calling their roles “incomparable.”

By this time in 2018, however, the spat was apparently resolved; Navratilova tweeted on June 8, 2018, “Very happy to announce I will be working at Wimbledon, it’s good to see the BBC taking gender pay equality seriously.” As The Independent reported last year, “It is not clear whether Navratilova’s pay has now been increased, or what her earnings will be this year, but the pundit previously said her agent would ask for more money in future.”

So, here we are, in the future, and Navratilova is getting paid to host a documentary on a topic in which she is clearly invested.

While the idea of exploring the issues that trans athletes face in depth is laudable on the surface, it’s fair to assume from Navratilova’s tweets and editorial that she’s not the right choice to approach the subject in “an open and constructive way.”

Furthermore, framing the documentary as a look at “all sides of the debate” implies that believing “male athletes transition to female just to win a trophy” is a valid point worthy of consideration, instead of being a pitch for a terrible Adam Sandler movie. To be blunt: This is simply not an issue with two valid arguments.

It’s doubly hurtful that the attacks against trans athletes that inspired the doc were being made by someone who until this point had been an all-time inner circle role model for LGBTQ people everywhere.

Martina Navratilova is still one of the most important athlete activists that the community has ever produced, and she remains one of the most noteworthy barrier breakers in sports history. As Women’s Sports Foundation executive director Donna Lopiano put it, “Martina was the first legitimate superstar who literally came out when she was a superstar.”

And she did it in 1981, the era of Reagan and the Moral Majority. As anyone who’s ever seen any LGBTQ-themed movie knows, that was an unimaginably difficult time to be the public face of being out. Being true to who she was cost Navratilova millions of dollars in potential endorsement deals. This is a woman who has truly sacrificed for the cause of equality and she has the receipts to prove it. 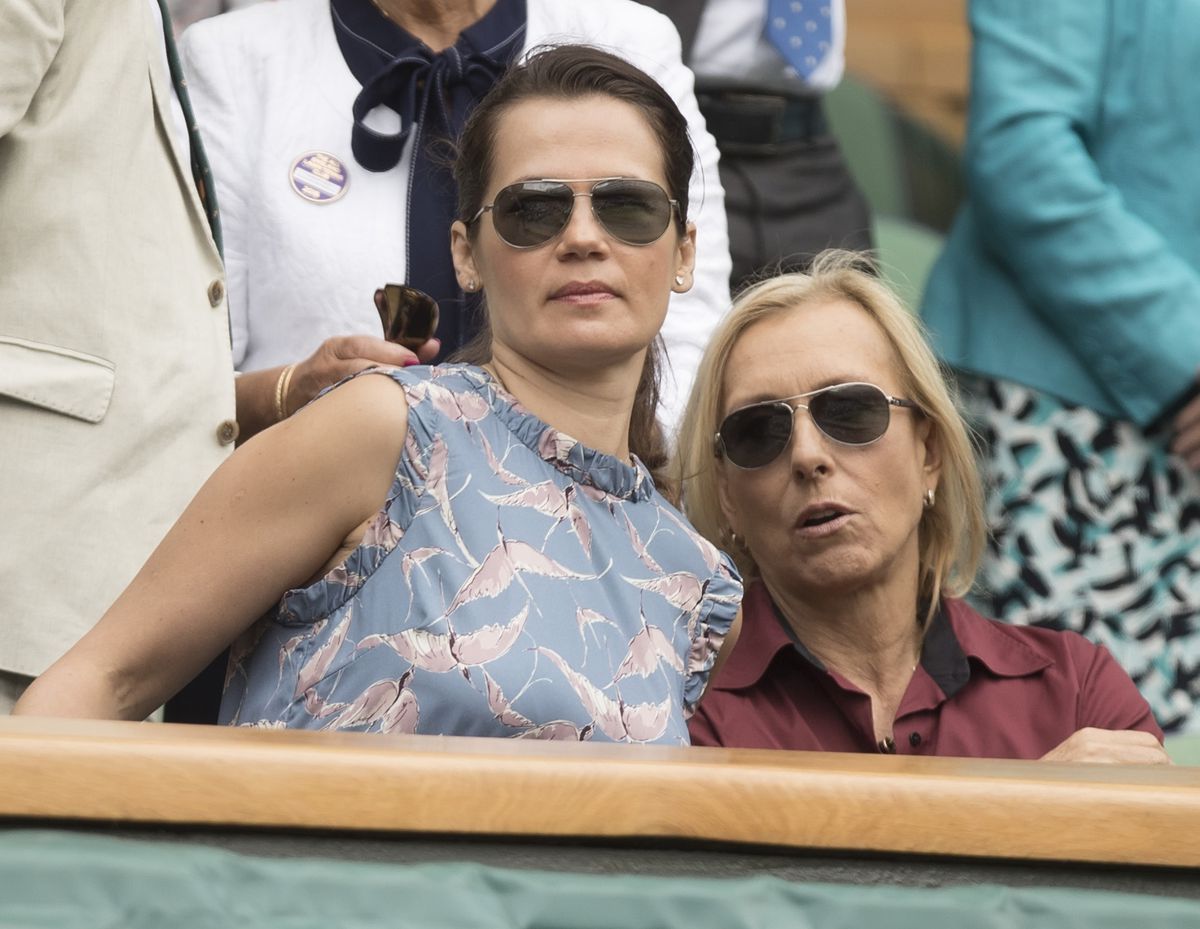 Navratilova with wife Julia Lemigova. This was “controversial” enough to keep her off of a Wheaties box in the 1980s. Susan Mullane-USA TODAY Sports

Not only has Navratilova been a public face for the community, she’s also been a major benefactor. She was one of the speakers at the 1993 March on Washington for Lesbian, Gay, Bi and Equal Rights and Liberation. And she helped create the Rainbow Card, a credit card whose proceeds helped bankroll the Rainbow Endowment which distributed needed funds to numerous LGBTQ charities. Throughout her career and beyond, in her on-court achievements, activism and charitable contributions, Martina Navratilova was a source and a symbol of everything that pride stood for — up until a few months ago.

Which makes it all the more unsettling that she’s chosen to put this legacy at risk through the rigidity of her opposition to trans athletes. In an ideal world, her story should be about the obstacles she has overcome and the achievements she has rightly earned. But now that inspiring life story has been justifiably muddled by transphobic public comments. And it’s all her own doing.

If it feels as though the opposition to Navratilova has been especially virulent, that’s because it’s doubly hurtful when a supposed ally levels these attacks at one of the most vulnerable parts of our community. Perhaps Navratilova should realize that when her biggest defenders are Breitbart and The Daily Caller, it might be time to reconsider her views on the subject. 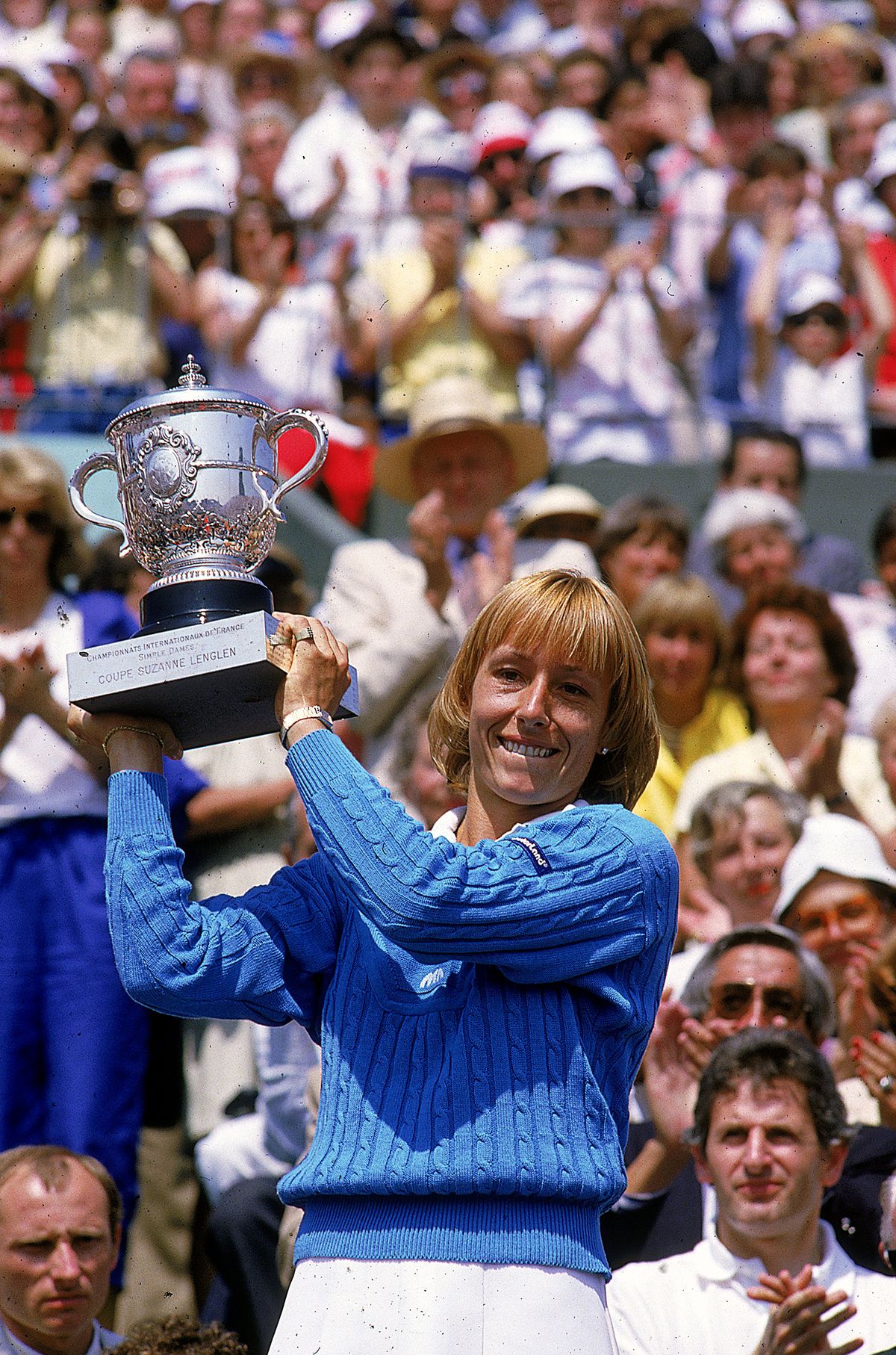 Up until she started speaking about trans athletes, this was Martina Navratilova’s legacy.

And now there’s a documentary with Navratilova at front and center that has the potential to add more fuel to the fire and possibly even exacerbate her public downfall. To get a sense of the direction the film is going to take, Outsports spoke with distance runner and medical physicist Joanna Harper, who has studied and written extensively about the effects of hormone therapy on trans athletes, and who spoke to Navratilova as one of the film’s interview subjects.

Based on her experience, there is perhaps a small glimmer of hope. Harper noted that “I think the producers gave proper credence to both my personal athletic performance and to my research.” That’s certainly good news.

As to Navratilova’s involvement, Harper related that “Martina was certainly friendly and not dogmatic in any sense when we spoke,” and emphasized, “I doubt that she is actually transphobic.” Despite this, Harper also admitted, “I doubt, however, that I changed her mind on anything, other than perhaps a new respect for the research that we are trying to do.”

There’s the rub. The more Navratilova makes herself the face of misguided opposition to the trans athletic community, the more this is going to become an intractable part of her legacy. As mentioned above, Navratilova had an opportunity to educate herself on the topic and evolve her views after the firestorm that followed her initial tweets on the subject. But whatever research she did was clearly one-sided or not enough as she dug her heels in even more forcefully with her editorial.

Regretfully, the end result of this is that she is no longer simply a misguided voice of opposition, she is now the face of the movement to ban trans women from sports. And if this documentary becomes another missed opportunity to publicly recant her previous comments, it’s only going to further cement her as a standard bearer for transphobia in sports. There are only so many chances to change public perception before it becomes an enduring part of how she will be viewed going forward. And so far, she’s missed them all.

At this point, the only positive sign is that Navratilova appears to be engaging experts in the field instead of writing think pieces based on prejudiced falsehoods. But if Joanna Harper’s research can’t move her to alter her opinions toward a more inclusive and scientifically accurate viewpoint, it’s tough to guess what it’s going to take.

We had all assumed Martina Navratilova was so much better than this. Because up until she tweeted her first comments on the subject, all the evidence indicated that she was. And while it appears that the upcoming BBC documentary is not going to be a dogmatic and transphobic rant similar to her previous writings on the subject, it certainly sounds like she has no plans to evolve her views on the subject. If that’s the case, it will go down as a missed opportunity for her legacy.