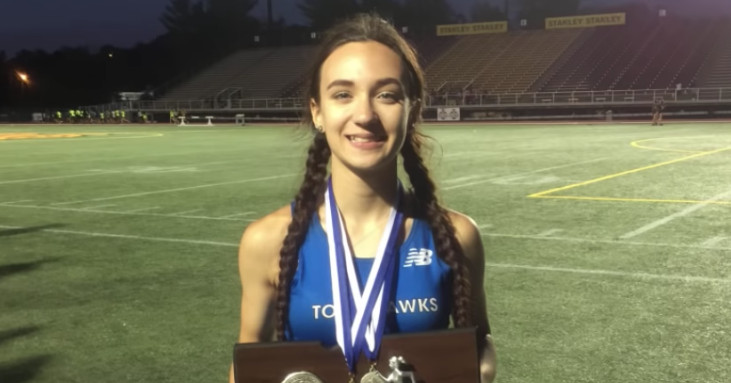 The girls are all represented by the anti-LGBTQ Christian-run advocacy law firm, Alliance Defending Freedom, which the Southern Poverty Law Center has designated as a hate group. While two of the girls were not named because they are minors, a third was identified as Selina Soule of Glastonbury, Conn.

Soule has frequently appeared on Fox News about her losses to trans athletes, including Monday night on “Tucker Carlson Tonight,” when the ADF broke the news of its complaint. As transgender writer Parker Molloy noted, it was yet another episode in which the conservative host focused on transgender Americans and trans athletes.

She also recorded a YouTube video about her losses, which has been viewed more than 24K times.

The letter sent to the DOE’s Boston Office for Civil Rights asks for an investigation into the Connecticut Interscholastic Athletic Conference’s “discriminatory policy” that ADF claims “threaten to reverse the gains for girls and women that Title IX has achieved since 1972.”

“This discriminatory policy is now regularly resulting in boys displacing girls in competitive track events in Connecticut—excluding specific and identifiable girls including Complainants from honors, opportunities to compete at higher levels, and public recognition critical to college recruiting and scholarship opportunities that should go to those girls.”

The ADF names two transgender girls, Andraya Yearwood and Terry Miller, and misgenders them throughout the complaint by referring to them as “male in every biological and physiological respect.” There is one caveat: “We do not question any gender identity claimed by any students, and use the names preferred by each student rather than legal names,” the group wrote.

The ADF claims it has documented “50 separate times in competitions since 2017 that specific, identifiable girls have been denied the recognition of being named state level first-place champions, and/or have been denied the opportunity to advance and participate in higher-level competition, in CIAC-sponsored events as a result of the unfair participation of Terry Miller and Andraya Yearwood in girls’ track competitions.”

Outsports reached out to Yearwood’s parents and to other trans athletes for reaction.

“It’s laughable to think that a couple of trans girls cost these three plaintiffs anything,” said Athena Del Rosario.

“Prospective colleges are going to be looking at their finish times and not what place they came in. They should have trained in such a way that would of been conducive to achieving their goals of making better times that would attract college recruiters. There are literally hundreds of colleges. The only thing that may have cost them opportunities is their poor attitudes towards other athletes and their focus on others instead of themselves.

“If anything those numbers in the finish times prove that they don’t have an advantage.”

“They wouldn’t have filed this had not Cecé Telfer won [an NCAA national championship] in the last month or so,” said Chloe Psyche Anderson.

Rahsaan Yearwood, Andraya’s father, told Outsports he was certain this was the work of Bianca Stanescu, Selina Soule’s mother, who before this complaint started a petition to change the CIAC rules allowing trans girls to compete with cisgender girls.

“I’m sure she started it,” Yearwood said. “Doubt this goes anywhere.”

Stanescu was frustrated to have received only 196 signatures on her petition, and also failed in her effort to win support from state and local lawmakers to change the CIAC rules. Connecticut has had a non-discrimination law on the books to protect transgender individuals since 2011.

Outsports has also reached out to the family of trans athlete Terry Miller for comment.