London has been hosting Pride parades since 1972. The event attracts approximately a million people, and is the only annual event to close Oxford Street, one of the busiest streets in the city.

Despite the size and popularity of Pride, the United Kingdom has endured a long battle with queer rights.

The Offences Against the Person Act 1861 removed the death penalty for homosexuality, yet same-sex acts remained illegal, and were punishable by imprisonment.

The police were very strict about laws against homosexuality in the 1950s. There were 1,069 gay men in prison throughout England and Wales by the end of 1954.

In 1957, the Wolfenden Committee released a report analyzing the laws relating to “homosexual offences.” The report suggested that “homosexual behaviour between consenting adults in private should no longer be a criminal offence”, finding that “homosexuality cannot legitimately be regarded as a disease, because in many cases it is the only symptom and is compatible with full mental health in other respects.”

Same-sex couples received legal recognition in 2005. In the same year, people became legally allowed to change their genders. Discrimination based on sexual orientation had been prohibited since 2010.

Even though Great Britain had made so much progress in regards to queer laws and human rights, there are still violent hate crimes committed against people in the community every year.

The Crown Prosecution Service releases an annual report detailing the number of hate crimes reported each year. In 2018, “The volume of homophobic, biphobic and transphobic hate crime referrals from the police increased … to 1,564 – an increase of 172 referrals (12.4%),” from the previous year.

On May 30, 2019, a lesbian couple was brutally attacked on a bus when they refused to kiss for a group of men.

LGBTQ rights has come a long way, but it still has a long way to go – and the parade will lead the way.

Here are some photos from recent Pride Parades in London: 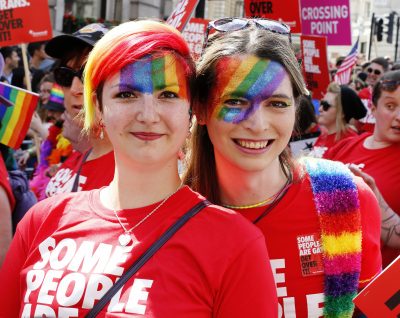 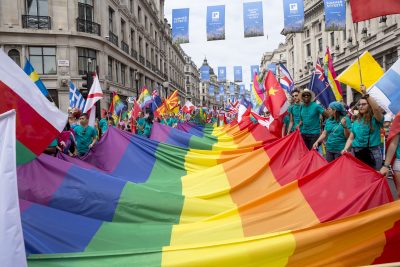